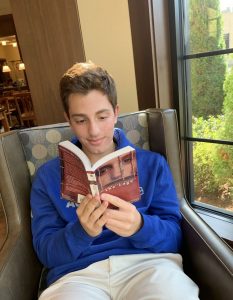 Ruth Minsky Sender is an accomplished author who detailed her experiences as a Holocaust survivor in her memoirs “The Cage,” “To Life“ and “Holocaust Lady.” After imprisonment in labor camps in Germany as a teenager she was liberated by Russian forces and moved to the United States.

Today, Ms. Sender’s great-grandson Gavin Sender is a seventh grader at Pace Academy. He introduced his great-grandmother as the speaker at an assembly for upper school students to learn about the Holocaust on Nov. 4.

Ms. Sender told the students her powerful story about surviving the Holocaust and read aloud a poem that she wrote reflecting on her experiences. Students could feel the strength in her words when Ms. Sender repeated the phrase “as long as there is life, there is hope.”

Ms. Sender was born on May 3, 1926 in Łódź, Poland to parents Avromele and Nacha Minska. She was one of seven siblings named Chanele, Yankele, Mala, Motele, Moishele and Laibele. Her father, Avromele Minska, passed away following the birth of her younger brother, Moishele.

When Poland was invaded during World War II, Ms. Sender’s older siblings were able to escape to Russia, but Ms. Sender, her mother and her younger siblings were not able to leave. They ended up living in the Łódź ghetto that was under Nazi occupation. The Nazi soldiers began clearing out the ghetto by taking away the sick and elderly Jewish people.

When Ms. Sender’s younger brother, Laibele, became sick with tuberculosis, Ms. Sender and her family decided to hide Laibele in their cellar so that he would not be taken away like the others. This ultimately backfired because in 1942 when the Nazi soldiers began searching their house, Ms. Sender’s mother was so worried about Laibele being found that all color left her face. Due to her pale appearance, the soldiers thought that Ms. Sender’s mother was sick and took her away.

As the oldest remaining child in the house, Ms. Sender was forced to take care of herself and her siblings. Ms. Sender and her siblings would bring home rations of food for Laibele, but his condition did not improve. He eventually passed away and the rest of the family was sent to Auschwitz where they were separated.

Pace students recognized the importance in hearing Ms. Sender’s life story. “I think it’s really important to hear [her message] because it’s coming from a group of people that aren’t going to be around for much longer,” said junior Laura Romig. “It’s really valuable that we hear it now so history doesn’t repeat itself.”

Senior Zoe Freier echoed Romig’s sentiment explaining that she liked hearing Ms. Sender’s story because it was coming from someone who personally remembered the Holocaust. “We had an assembly last year where a Holocaust survivor came and spoke to us, but he was only a baby during the Holocaust so most of his stories were second-hand stories that his parents had told him” said Freier. “I liked Ms. Sender’s assembly because she was around our age during the Holocaust and she told us a first-hand account of it.”

Gavin Sender loved that the upper school students were able to hear his great-grandmother’s story. “I think the students were impacted by hearing a first-hand account of what really happened and how she kept her hopes up,” said Sender. “She wants people to never forget and learn from our mistakes.”