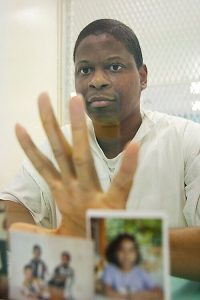 Rodney Reed is scheduled for execution on Nov. 20.
Photo: freerodneyreed.com

The American justice system has failed Rodney Reed. The 51-year-old Texas native is scheduled to be executed on Nov. 20 for the 1996 murder of Stacey Stites. Although it is uncertain as to whether or not Reed did commit this murder, it can be said with full certainty that he was not given a fair trial. In addition to an unjust trial, new evidence suggests that the true murderer was Stites’ ex-fiancé Jimmy Fennell who was a police officer at the time of her death.

Reed’s court case was entirely mishandled and now a likely innocent man is on death row. Reed has spent over 21 years of his life in jail for the assault, rape and murder of Stacey Stites. Plenty has been written in the media about the mishandling of Reed’s case. The Innocence Project, a non-profit legal organization that is committed to exonerating wrongly committed people, is a source of much of the information provided here about Reed and evidence that exonerates him. Another source is freerodneyreed.com.

The prosecution linked Reed to the murder after his semen was found in the body of Stites. The all-white jury that deliberated the case refused to acknowledge their relationship as consensual despite both a cousin and co-worker of Stites having confirmed Reed’s claim that the two were romantically involved.

Reed has made numerous requests for the murder weapon to be tested for DNA evidence, but the Texas Court of Criminal Appeals has continuosly declined to do so. Forensic experts have come forward acknowledging errors in their testimony, and forensic pathologists have deduced that Reed murdering Stacey Stites is both “medically and scientifically impossible.”

Jimmy Fennell had been a prime suspect in the case before Reed was charged. Although exonerated from the murder of his ex-fiancé, Fennell would later serve a 10-year sentence for the kidnapping and sexual assault of a 20-year-old woman.

Jimmy Fennell has a history of violence and abuse. While on duty in 2007, Fennell answered a phone call and soon arrived at the home of this unnamed woman. He claimed to be giving her a ride to meet her boyfriend, but instead Fennell brought this poor woman to a public park where he held her at gunpoint and raped her. Afterwards, Fennell told the woman that if she did not keep her mouth shut, he would “hunt [her] down and kill [her].”

During the investigation, additional complaints of Fennell assaulting or stalking women while on duty were brought forward. When questioned about the murder of Stites 11 years prior to this incident, the woman said, “Absolutely; absolutely I do [believe Stites was the murderer,] 120%, based off of what Jimmy Fennell, Jr. has done to me and the experience I went through with him, I think that man is more than capable of murder.”

Although the last location where Stites was reportedly seen alive was in the apartment which she shared with Jimmy Fennell, authorities failed to conduct a search. Reed also had an alibi for where he was at the time of Stites’ murder, but this information was disregarded in the case.

In October 2019, Arthur Snow, former prison mate of Fennell, came forward with new information related to Stites’ murder. According to Snow, Fennell bragged in prison about murdering Stacey Stites. “I had to kill my n**** loving fiancé,” Fennell allegedly boasted.

Found next to the body of Stites were two beer cans which were DNA tested. These tests excluded Reed, but brought two other suspects into the equation, both of whom were police officers and friends of Fennell.

Another man named Joe Bryant had been conducting an unauthorized investigation into Stites’ killing and was then gunned down by a migrant worker from Mexico. Bryant’s widow claims that before he was killed, Bryant told her that he believed Fennell to be Stites’ killer. Reed believes that the migrant worker was used as a scapegoat to make sure the truth would remain hidden.

It is glaringly obvious that there are numerous red flags in the State v. Reed trial, and for him to be executed in 11 days would be both an outrage to the American people and a complete violation of the Constitutional right to be considered innocent until proven guilty.

The Innocence Project is doing a tremendous job in fighting for Rodney Reed’s justice, but they need help from the people.

Journalists, activists and celebrities all over the country have taken action to protest Reed’s execution. Civil rights activist Shaun King started a petition which currently has over 2.3 million signatures. King’s petition demands that Texas Governor Greg Abbott stop the execution, which he has the power to do and has done in the past. Celebrities rallying support for Reed include Oprah Winfrey, Mark Cuban, Lil Dicky, Gigi Hadid, Rihanna, Meek Mill and Pusha T.

On Nov. 5,  26 Texas legislators (13 Republican and 13 Democrat) wrote an emergency letter to Governor Abbott asking that he grant a stay of execution for Reed and even consider reducing his sentence. On Nov. 6, Republican Texas Legislator John Cyrier and a representative of the district in which Stites was murdered wrote a similar emergency letter to the Governor as well.

Shaun King and civil rights attorney Lee Merritt will be hosting a statewide protest alongside Reed’s family on Saturday, Nov. 9 from 2 p.m. – 5 p.m. outside the Governor’s mansion in Texas.

Despite public uproar, Governor Abbott has yet to release a statement on Rodney Reed’s execution.

HOW YOU CAN HELP:  Visit https://www.freerodneyreed.com/#sign

This website set up by Shaun King has numerous ways in which you can contribute to saving the life of an innocent man.