Your Metal Straw Won’t Stop Climate Change. Here’s What Will. 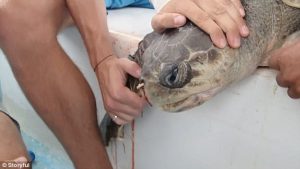 The movement against plastic straws started with a video clip of a turtle with a straw jammed in its nose. Photo: Daily Mail

It all started with an eight-minute-long video of a sea turtle with a plastic straw jammed in its nose, gasping for breath as blood ran down its face. It was a video that would later launch the movement against plastic straws, dominating the environmental headlines for much of 2019. But despite its undeniable appeal and unexpected popularity, the question remains: has the anti-plastic-straw movement actually produced results?

While plastic straws are problematic for the environment because of their shape, which makes them difficult to recycle, they’re actually a minor source of marine plastic pollution. Straws make up just 0.025% of the 8 million tons of pollution that flow into the ocean every year. In fact, the major sources of marine pollution are fishing nets, balloons, plastic bags and cigarette butts.

And yet, despite their relatively small impact, straws have become the scapegoat for the climate change debate. It is common to see people with metal straws, and in many restaurants people now have to ask for straws rather than have them automatically brought with the drink.

Companies such as McDonald’s and Starbucks have promised to phase out their use of plastic straws, setting an example for the entire food and drink industry. But these changes can often be more harmful than the plastic straws that they’re supposed to replace. For example, the new straw-less Starbucks lids use more plastic than a straw would, and production of a metal straw can consume more energy and create more waste than the production of a plastic straw would.

The movement against plastic straws is a good start for a wider societal reckoning about the way our consumerism has driven climate change. But, it should be considered just that – a start. A focus on straws is good, but the fixation has become a distraction from identifying far more impactful choices that we can make every day to truly have an impact.

First of all, we need to remember our power as consumers in a capitalist system. We vote with our wallets. The movement against plastic straws has been a consumer initiative; consumers demanded change, and corporations responded.

It is essential that consumers build upon the momentum of this moment. One possible policy approach would be to push for Extended Producer Responsibility (EPR), a policy approach under which producers are given responsibility – financial and/or physical – for the treatment or disposal of post-consumer products. It is an approach that has seen success in countries such as the U.K., France and Japan.

But policy is not the only level on which we can create environmental change. When it comes to personal habits, the Isdell Center for Global Leadership (ICGL) theme of waste for this school year is timely. We often think of plastic products as acceptable because they can be recycled. Instead, we should start seeing recycling, or throwing things away, as a last resort. We should minimize our overall waste.

There are literally countless options for a consumer hoping to cut down their environmental footprint. We can reduce or completely cut out meat from our diets. We can prioritize public transport, biking and walking over driving. We can use less water by making small adjustments, from taking shorter showers to turning off the tap while brushing teeth.

We can thrift or pass down clothes rather than buying new ones, particularly from fast-fashion sites that generate inordinate amounts of waste. We can reduce our food and plastic waste simply by being more conscious of our shopping and consumption habits. We can become educated on the ways in which we as individuals and corporations produce harmful waste.

In a remarkably polarized world, one simple statistic is promising for the environmental movement. According to Forbes magazine, 88% of consumers want the brands they buy from to support sustainable lifestyles. And many consumers are putting their money where their mouth is, forcing companies to meet the demand for environmentally-conscious products and production.

The anti-plastic straw movement probably won’t do much for the environment, but it’s a symbol for what consumers can do when they believe in the power of their personal choices. Your metal straw won’t save the world, but the values that led you to buy it can, as long as you don’t stop there.