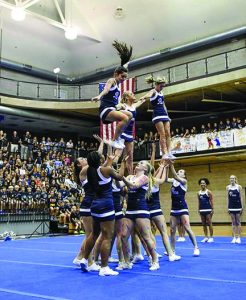 Everyone associates energy and enthusiasm with cheerleaders, but the Pace Academy varsity cheer squad is so much more than that. This year Pace cheerleading has added a competitive cheer team led by junior captains Hayley Cavinder and Casey Shoulberg.

“The competition team started because we wanted a way to become our own sport and try something more challenging than we’ve ever done before,” said Cavinder. At varsity cheer tryouts, girls were asked which teams they wanted to be on (varsity or competition), and based on performance at tryouts, the coaches decided who made competition.

In terms of judging, points are based on the difficulty and execution of the different sections in a cheer routine, which include stunts, running tumbling, standing tumbling, jumps, cheer, dance and overall spirit. The team with the most points wins for each division. The Pace team has won their division for all three of their competitions. “We’ve gotten more points each time we’ve competed, which is our own personal goal and I’m really proud of everyone for working hard and making that happen,” said Cavinder.

Cavinder actually started off as a competitive gymnast for five years. Since she was a junior knight, she looked up to the varsity cheerleaders. “I was super excited to finally be a real high school cheerleader,” she said.

Cavinder was surprised that gymnastics and cheer were so different. “I had a lot to learn about stunting, dancing and a lot more, but over time I’ve become a lot more familiar with the techniques and skills required to do all of the cool flips and tricks we put in our routines and perform on sidelines,” she said. She has been a key part of the team’s success this year.

Another contributor to the cheer team’s success is their rigorous practice schedule. Competition cheer practices before school every Thursday and after school every day with the varsity cheer team. Occasionally, they have practiced on the weekends and after regular varsity cheer practice in the afternoons. “Six a.m. practices are hard work, but they’re rewarding,” said junior Elizabeth Kaye. “That’s how we get better is just by putting in the time and effort to succeed in our competitions.”

Kaye, a back-to-back AAA state championship diver, decided to try cheer for her junior year to “branch out.” “It was a slow start at the beginning because most of the members already knew all of the cheers and dances, but with hard work I caught up and was able to use my diving background to help me with tumbling and flexibility,” she said.

The team now moves on to sectionals for Region 3A, slated for Friday, Nov. 15 at 8:30 a.m. The final championship is on Saturday, Nov. 16 at 9 a.m. for Region 3A. Both take place at the Columbus Civic Center in Columbus, Georgia. “We are so excited for region and we have practiced new tricks and routines to make this a remarkable competition. It is challenging to win are first season competing, but I am very confident in our team’s abilities  ,” said junior and competitive cheer team member Eve Kogan.