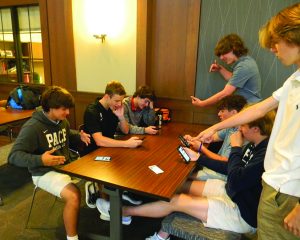 Over the past two months, if you have walked through the Seaman Family Student Commons or the Inman Center, you have most likely seen boys circled around each other, talking, yelling and crying about their players and teams. In early September, the NFL season began, as well as a favorite activity among Pace high schoolers, Fantasy Football. The pastime is pervasive throughout the halls of the school, taking the place of homework and studying.

Before a league starts, a series of crucial choices present themselves. There are many online platforms that support Fantasy Football including ESPN, NFL, Yahoo and CBS. Most of the Pace leagues are created on ESPN or NFL, based on the preference of the group. “I like how the NFL app is centered around football,” said junior Eli Mautner. “ESPN has too much going on with all the other sports it caters to.”

Beyond the different platforms, drafting systems can differ between leagues. Most all Pace leagues follow the “snake draft” system which snakes back and forth through the various teams. For instance, if a team had a second pick in the first round, the same team would have a ninth pick in the second round. Unlike the rest, a sophomore league headed by Alex Karamanolis prefers the “auction draft” system. “The auction is hype,” said sophomore Matthew Steiger. “It takes like five hours but involves strategy.” This system consists of receiving a set amount of money that is used to bet on players.

The culture that comes with Fantasy Football is beloved by its participants. During the season, lots of conversations revolve around the activity. “The best thing about Fantasy is the banter with your friends,” said Mautner. “There is trash talk and always something to talk about.”

Throughout the day, friends converse and negotiate trades, which is a major part of Fantasy Football. “In my league, trading is pretty difficult,” said junior Noah Levenson. “People form a really special bond with their players, which creates roadblocks in the trading system.” The relationship that is established between an owner and his Fantasy players is an ongoing roller coaster through the season. Relations with a Fantasy player could be great one week, then horrible the next due to an unproductive game.

Thursdays, Sundays and Mondays have become the favorite days of the week for Fantasy owners. “Thursdays are the best,” said sophomore George Blaha. “I love watching my players on a school night.” Watching games takes up a lot of an owner’s time, and with games running throughout the day, homework sometimes takes a backseat for Fantasy owners.