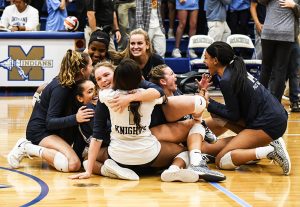 Every season and every team is different. Yes, we had incredible talent. But these young women had to navigate a lot of pressure coming from all angles – life, academics, college choices, athletics and injuries.

It is HOW they managed and came to respect one another that created a synergy greater than themselves. This is how I will best remember this team.

It is rare that all that talent comes together at the same time. The semi finals was one of the greatest exhibits of perfection I have ever seen. Everything clicked.

The state championship was different. I felt this team wanted to win for Sasha and Kalissa. This was Sasha’s first state championship as a player and as incredible as she is, she was really nervous. Kalissa broke her little finger in the semis and we did not know if she would be able to play. Her teammates all knew they would have to step up and deal with the pressure.

Lucy Ferry took over late in the first set to give us a 25-21 win. She had an incredible senior year. What a way to end it. Kalissa played with her usual brilliance. Ironic how her last play was dumping the ball with her injured right hand. Ada brought her best game of the year leading the team in kills. Sasha got over her nerves and was unstoppable.

Dominique, Morgan and Hannah never let Westminster get on a run either serving or attacking. Megan had several key kills when we desperately needed a sideout. Taylor entered during important points in the match to shore up our defense.

Everyone played. That doesn’t happen EVER, but that is what happens when you have a true team.