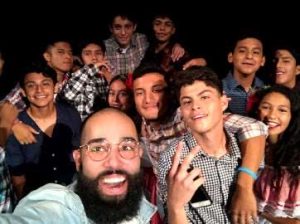 This fall, the Pace community gathered to participate in Hispanic Heritage Month, a month meant to celebrate Latino culture and traditions that extends from Sept. 15 to Oct. 15.

While this is not the first time that Hispanic Heritage Month has been celebrated at Pace, this year the effort was spearheaded by Omar

“I was born in Puerto Rico, and I lived there until I was 11,” said Mr. Thismón. “We finally landed in Miami, where it feels like every day is Hispanic Heritage Month. But when I went to a small, Christian, liberal arts school in Tennessee, I became a minority, and it made me think a lot about my own culture.”

Mr. Thismón has thought a lot about Latinos and their place in the national conversation as well, which led him to organize a breakfast this year with Hispanic students and faculty members to discuss ideas for how to celebrate Hispanic Heritage Month.

The group included more than a dozen students of Hispanic heritage across all grades of the Upper School. “We really wanted to focus on giving everyone a chance to talk about their heritage but also share something, so we thought a presentation with a dance after would be the best way to showcase everyone’s thoughts and talents,” said senior Paula Sandoval.

The dance was especially challenging because it was almost entirely student-run. “Setting up the dance was definitely time consuming but worth it,” said senior Jesus Tadeo Pineda. “The group rehearsed twice a week before school. We all bonded really well and had a great time.”

Their hours of rehearsal led up to a performance in front of the Upper School during assembly, in which the group of students danced a variety of of Latin dances, including merengue, zapateado and cumbia. “It was really challenging… but it was so satisfying to go up there and show what we had put together,” said freshman Kate Romero.

Mr. Thismón was particularly proud of the work the students put in. “When we started the process, I reached out to them and they really took off,” he said. “For Latinos in particular, it is so easy to keep your head down and try to assimilate as much as possible, but I was so proud of them for putting themselves out there and celebrating their culture in such a public way. It takes a lot of courage and bravery to do that.”

However, the festivities didn’t end there. Pace students also participated in the annual tradition of “Salsa In the Gardens,” where students gather to learn to dance the salsa during break.

Also in celebration of Hispanic Heritage Month, Yehimi Cambron, an immigrant activist and artist, came to speak at an assembly. Ms. Cambron is an undocumented immigrant under the protection of DACA who uses her art to portray immigrants, whether through her famous murals, which can be seen around Atlanta, and in an exhibition at the High Museum.

“When you hear about DACA, it seems like such a foreign problem.” said Mr. Thismón. But to put a face to that, to put a story to that, it shows that there are people right here in Atlanta that are impacted by policy decisions made so far away.”

The many events served to educate and broaden the minds of Pace students. “I really enjoyed hearing everyone present on their different countries and how Hispanic heritage involves so many different cultures and ways of life, because I think there’s a tendency to lump together all Hispanic cultures,” said senior Sandy Lum.

Getting students to understand and recognize this plurality and diversity was exactly Mr. Thismón’s goal. “Hispanic culture is so diverse that I can talk about things that I grew up with but it’s not necessarily representative of the population,” he said. “That’s why it’s so important to represent different countries.”

But Hispanic Heritage month is not only about educating the Pace community; it’s also about giving Latino voices a place at the table. “Hispanic Heritage Month is an opportunity to share interesting things with others,” said Paula Sandoval. “But it’s also a chance for Latino students to remember and honor their ancestry and how much their families have sacrificed for each other, and to embrace our culture.”