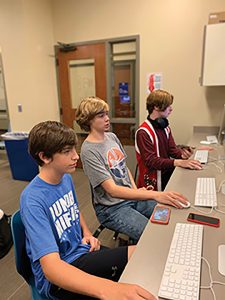 There is a varsity sport that takes place in the computer lab? Yes! Electronic sports (esports), multiplayer competitive video gaming, is now a GHSA sanctioned sport. At Pace, students can now show off their creative minds in the virtual world, playing games such as “Rocket League” and “SMITE,” all while earning a varsity letter.

Last August Pace Athletics Director Troy Baker mentioned this new GHSA sport in a coaches-only meeting. Upon the meeting’s conclusion, computer science teacher Charlie Bryant bolted over to Dr. Baker and informed him that he would like to be the point person associated with esports.

Since then, Mr. Bryant has organized student interest meetings to attract members and has become the head coach of the new varsity sport. Esports has no GHSA regions, meaning there are no specific divisions for each school. The team does not need to travel for matches because games are held virtually, every Thursday in the computer lab.

Many people may not understand how video games can translate into a varsity sport, but Mr. Bryant thinks differently. “The difference between esports and just playing video games with friends is analogous to playing pickup basketball in the park and basketball in an organized league,” said Mr. Bryant. As the league kicks off its season, Pace has one team of three playing “Rocket League” and one team of five playing “SMITE.”

According to the GHSA website, “Rocket League” is “a sports-action game that combines soccer with driving.” Students compete in teams “to score as many goals as they can in a five-minute match.”

“SMITE,” as described by GHSA, is “a multiplayer online battle arena where players pilot mythological characters and fight for control of a three-lane map. Teams of five players must work together to level up their characters and secure map objectives to siege the enemy’s base and defeat the opposing Titan.”

Mr. Bryant has been intrigued by “League of Legends,” a multiplayer online action strategy game, so he is already accustomed to the competitive gaming world. “I figured among the faculty I would be the person that has the most enthusiasm for doing this,” said Mr. Bryant. “Also, I’m super excited to start a new program and to create a new culture at Pace.”

The sport’s two main goals are to work on individual skill sets and to improve coordination as a team.  Senior Austin Fuller joined the sport because he was interested in playing video games and simultaneously representing the school. He is an experienced “League of Legends” gamer, but is a part of the “SMITE” team for Pace.

Fuller is the middle player of the five “SMITE” team members, maintaining the middle lane and moving to the sides when the group needs help in a team fight. “We have learned from our first preseason loss to focus more on communication as well as more thought in the way we play,” said Fuller.

Many members joined the team because it was a chance to be a part of something new and to be founders of esports at the school. The team welcomes students at all levels of experience with the games. Senior Max Schiffer had no knowledge of either game before but sees his skills slowly improving for the “Rocket League” team.

Schiffer, alongside juniors Daniel Boddie and Aiden Critz, form the three starters for “Rocket League.” “I’m very optimistic for our team,” said Schiffer. “Between Daniel and Aiden, I’m definitely the newbie of the team but I try to learn the most from them. As far as the whole team, I’m hoping we can sustain ourselves for the whole season and get all the kinks out of our system.”

The fall esports season began on Oct. 14 and ends the week of Dec. 16. Playoffs are in January. In their first match of the season on Oct.31, the Pace “SMITE” team won 2-0 over their opponent, the Herman-Dekalb Central School located in New York. The eKnights “prevailed in a blistering 18 minutes – a standout result given that the average game time is 30-40 minutes,” according to Coach Bryant.

“Most impressive to me,” he said after the game, “is not the dominant performance our players had today, but the improvement in team communication and coordination from our first preseason match a couple of weeks ago.”

Fuller led the day with 42 eliminations playing in the Jungler role with Thanatos as his character, and freshman Will Hankins finished with a team high 24.5 KDA (the ratio of kills and assists to deaths.)

The eKnights “Rocket League” team was unable to compete due to technical issues. That match will be rescheduled.