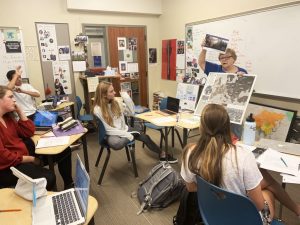 Upper school history teacher Helen Smith is excited to announce that she will be offering a trip to Poland this summer in collaboration with the Isdell Center for Global Leadership and Model United Nations. The anti-Semitism and Model North Atlantic Treaty Organization (NATO) Study Tour will take place June 11-23.

The trip combines an opportunity to take part in a policy simulation with the chance to explore Poland, specifically Krakow and Warsaw. “This year is particularly important because as anti-Semitism rises around the world, I think we need to be aware of how governments, through legislation and the judicial system, limit human rights even at times within supposed constitutional boundaries,” said Ms. Smith.

NATO is an intergovernmental military alliance between 29 North American and European States. The North Atlantic Treaty obliges each country in the pact to help defend against any attack by an outside party on a member state. Students will participate in a simulation for two days during the trip where they will learn about NATO’s relationship with China.

“Some students are concerned that this trip involves a policy simulation,” said Ms. Smith “That should scare no one because there is no grade; you just learn and interact with other teenagers from around the world.” Model NATO requires no extreme time commitment and provides an opportunity to learn about issues affecting numerous countries today.

The tentative itinerary in Poland includes tours of Kazimers, the Museum of the History of Jewish Groups, the Warsaw Uprising Museum and Auschwitz. The objectives of the trip are to study in one of the oldest European Jewish communities and learn about the development of Jewish identity, Jewish resilience, and Jewish cultural contributions, along with seeing how this was wiped out in the 20th century.

“I want us to see first hand, in Poland, how a history of anti-Semitism can be used by a government to gain power for itself,” said Ms. Smith. “As inciting hatred appeals to the worst instincts of human beings, the United States and our young citizens need to stand for the best.”

In a final pitch for why students should go on the Poland trip, Ms. Smith said, “You should go on this trip because traveling with me is fun, you eat good food, and learn about a new culture and issues facing us today with a group of involved students.”