More Diversity in Medical Field Could Save Lives 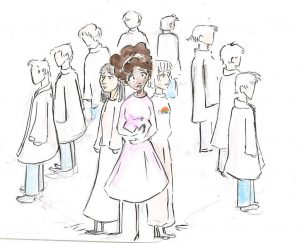 Black and Native American women are more at risk of dying from pregnancy than while women. Illustration: Kathryn Hood

The United States has the worst record in the developed world as far as maternal mortality goes. Though we are a leading power in the world, we are somehow incompetent when it comes to taking care of some of our most vulnerable citizens. According to National Public Radio (NPR), this deplorable maternal mortality rate is disproportionately affecting black and Native American women.

First, some stats: According to the National Partnership for Women and Families, black women are typically paid just 63 cents for every dollar that a white man makes. This means that they are making generally less than the nation’s median income. One study found that the average black woman makes $36,227, which is around $21,698 less than the median wages for white men.

This transfers to what insurance they are able to afford. Compared to white women, black women are more likely to be uninsured and face greater financial barriers to care when they need it. They are also less likely to have access to prenatal care.

These may be contributing factors to the death rate when black and Native American women give birth. Black and Native American women are about three times as likely to die in childbirth compared to white women in the United States. However, the disenfranchisement of these two groups is not the only thing that causes their deaths at such a high rate in childbirth – it is the fact that their pain is often dismissed and ignored, while white women are listened to more carefully.

According to the American Heart Association News, even very famous black women, such as Serena Williams, have had their very real concerns brushed off during childbirth. This has led to life-threatening situations that could have been avoided or treated quickly.

“The Resident,” a popular TV show on Fox, confronted the issue head on in a heartbreaking episode that showed not only the complications that can occur in childbirth but the devastation for families afterwards when delivery goes horribly wrong. The episode was based on a real-life occurrence, one in which Kira Dixon Johnson (the daughter-in-law of TV Judge Hachett) died while in labor due to a medical mistake.

Twelve hours after her bladder was nicked during a planned Cesarean section, she was finally attended to –six hours after staff had been notified of blood in her urine. She died when they finally opened her up, due to massive blood loss. Her condition was fixable – if the doctors had listened to her when she first complained of discomfort. Her husband formed a nonprofit named 4Kira4Moms, an organization that strives to prevent more families from having to go through similar heartbreak.

This is not confined to only black women, however. According to Harvard Business Review, research found that black men treated by black doctors received more effective care. It has been argued that sharing a racial or cultural background with one’s doctor helps promote communication and trust, which led to the black men agreeing to more invasive, preventative procedures. By encouraging more preventative screenings, a workforce with more black doctors could help reduce cardiovascular mortality by 16 deaths per 100,000 each year.

All in all, this shows a fact, pressing and urgent: people need to be represented in the medical industry. This includes women, black people, Native Americans, LGBTQ+ people and every other underprivileged group. Having someone you’re comfortable with treating you can save your life and countless others.