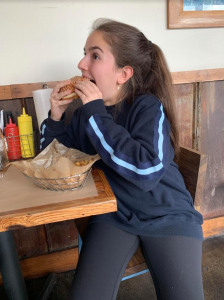 When you think of veggie burgers, you probably envision the dry, crumbling texture that comes from a mixture of lentils, soybeans and tofu. The Impossible Burger, a veggie burger made to mimic meat, is just the opposite. It boasts soft, savory “meat” that has a pink interior.

Impossible Foods aims to reduce the environmental impact of the beef industry on the planet. According to the Food and Agriculture Organization of the United Nations, the meat production industry contributes to about 14.5% of greenhouse emissions and significantly contributes to deforestation, water pollution and biodiversity loss. To put that into perspective, the greenhouse gas emissions from producing meat contribute to global warming more than all transportation combined.

That’s where plant-based meats come in. Genetically engineered wheat, soy, corn and other common crops can be combined with the muscle protein, myoglobin, to produce plant-based “meat” that is very similar to real meat. The Impossible Burger contains 19 grams of plant-based protein the same as a ground beef patty, but with only 240 calories. Impossible Foods claims that their production method emits 87% less greenhouse gases, requires 95% less land and 75% less water than traditional meat production methods.

The greater accessibility of vegan options is increasing the number of people who are trying the Impossible Burger simply because they are curious. “I thought it was really good,” said upper school biology teacher Kaylan Haizlip. A pescatarian since childhood, Dr. Haizlip was excited to see another burger option available to her.

On the other hand, senior Josh Pickman disagrees with the concept of the Impossible Burger. “The point of being vegan or vegetarian is to not eat meat, so why would you want to make the taste and texture of a vegetarian burger similar to that of a meat burger?” said Pickman.

The Impossible Foods “cook-at-home” “meat” expanded into grocery stores in Southern California on Sept. 20. The company hopes to offer their product for consumers to buy in grocery stores nationwide in the near future.