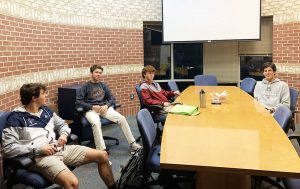 Thirty clubs are available to upper school students this year, providing plenty of opportunities to take part in Pace culture. There are clubs for most every student’s interests, ranging from those that are leisure oriented to clubs focusing on societal issues.

The Airsoft Club is new to Pace this year and led by junior Jack Carson. Occasionally, the club convenes on Friday mornings in Mr. Kaufman’s room to discuss logistics, but most of the club’s meetings occur outside of school. They play airsoft in different locations on the weekends aiming to provide a place for students to meet other students who enjoy the sport. They also hope to help those who have never played get started. “All are welcome, the more the better,” said Jack. “Airsoft is an extremely fun sport, especially when played with friends.”

Another addition this year is the Outdoors Club. Math department chair Gus Whyte and science teacher Kevin Ballard have led outdoor trips such as kayaking and hiking in the past, but these have never been part of any formal club. The Outdoors Club was created in association with Mr. Whyte to form a group of students interested in such trips. The club hopes to go on at least one trip before the end of this semester.

A group of active students joined forces this year to create the Ultimate Frisbee Club. The club does not have a strict schedule to follow. They occasionally hold practices on weekdays and compete against other schools on weekends. Pace was able to send two teams to compete in a 10-team tournament at Wheeler High School at the beginning of October, placing second and fourth. “We train at practices to try and improve our skills, but at the end of the day we just want to have fun and enjoy ourselves.” said senior Alan Tapper.

The Modern Music Appreciation Club was formed by junior Marc Rosenthal for music lovers to have a place to both listen to and discuss new music. The primary focus of the club is to broaden people’s music horizons by expanding the types of music that students listen to. “We facilitate interesting discussion and analysis about all types of music… at the end of the day if people come to the club, hear music they haven’t heard before and find new music that they enjoy, then that would be a success,” said Rosenthal. The club meets every Friday morning before the start of school.

Women Mentoring Women continues this year with the aim of preparing young women to step up and take on leadership roles even when it may feel uncomfortable. The club, led by seniors Jordan Upchurch and Rekha Sashti, meets on the first Wednesday of every month.

Baking for Breast Cancer, another established club, strives to not only raise money for the cause, but awareness as well. According to club leader and senior Mary Lawson Bring, this year the club hopes to raise around $300 per bake sale and to have one each month. Numerous baked goods are sold by club members in the Inman Center, including cupcakes and cake pops. Students contribute by baking goods to sell and by selling them during free periods.

Students who are interested in joining a club can still reach out to club leaders and join at any point throughout the year. For a complete list of all club offerings and leaders, reach out to any student council member.