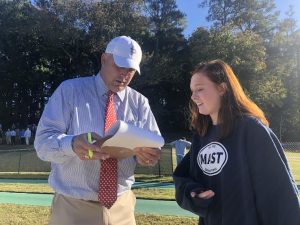 Having just moved to Atlanta from Dallas this past June, new Associate Athletic Director Chad Wabrek is embracing his new role. Previously, Mr. Wabrek worked as the Head of Athletics and Physical Education at the Greenhill School in Addison, Texas.

After his wife, Chelle, was offered a job as the new Assistant Head of School for Academic Affairs at the Lovett School, Mr. Wabrek began looking for schools for his youngest son going into senior year. While on his search, Mr. Wabrek met Head of School Fred Assaf and found out about the Associate Athletic Director position opening at Pace following the retirement of Tim Walsh. Although his son ended up at North Atlanta High School, Mr. Wabrek “quickly fell in love with the student body and the people [he] met” at Pace.

Mr. Wabrek and his wife are familiar with working at rival schools. “Because she and I are both in educational administration, we have actually worked at rival schools before,” said Mr. Wabrek.

Though he is now in athletic administration, Mr. Wabrek has been in education for 25 years, serving as an English teacher, dean of students and an English department chair as well as a coach for football, ice hockey and lacrosse. He received a master’s degree in English from the Bread Loaf School of English at Middlebury College after attending undergraduate school at Hobart College. There, he earned a bachelor’s degree in urban studies and a minor in American studies while playing football and lacrosse.

“By design, I’m not coaching a particular team,” said Mr. Wabrek. “I am worried about the entire athletic department from top to bottom. I’m looking at things big picture.” Since he is not coaching, Mr. Wabrek is looking for new opportunities to get involved in the community and to embrace his love of teaching. “Hopefully I might at some point teach an English class or teach a transitions class or something like that,” he said. “I’m a big student athlete kinda guy.”

When Mr. Wabrek is not working, he enjoys spending time with his wife and three sons whenever possible. He also has “been on a rampage of reading biographies” since he stopped teaching English. “I try to read a biography a month,” said Mr. Wabrek. “Because I am in athletics, they have been about a lot of coaches.”

Mr. Wabrek is very optimistic about the future, even when he considers what he is nervous about in his new environment. “Any nervousness I have is not wanting to step on anyone’s toes, but at the same time politely bring new ideas to the table.” However, he is ready to take on the challenge because he has done it before. “Private school education has a tendency to pull you around the country, and that’s been OK because it’s been new experiences all the time.”

Mr. Wabrek believes strongly in living in the moment. “I don’t really keep a bucket list,” he said. “If you want to go do something you should just arrange it and go do it. The future is a whole string of nows. You have to enjoy the moment.”