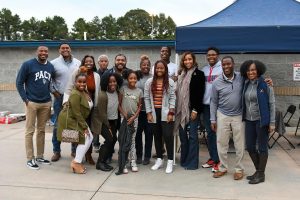 The Association of Black Alumni hosted a tailgate before the Pace/Lovett Football game on Oct. 18. Photo: Fred Assaf

The idea of creating an association of black Pace alumni was sparked during the spring of 2018 while alumni Ross Brown ‘07 and Kevin Linder ‘94 were participating in Leadership Pace. The two then spoke to fellow alumnus and member of the Pace Academy Alumni Association, Jason Lee ‘96 and Director of Diversity and Inclusion Joanne Brown to set the idea into motion.

Through a new association, they are already becoming more involved in the community, having hosted a breakfast to celebrate Dr. Martin Luther King Jr. Day, as well as sponsoring a tailgate at the Pace/Lovett Football game.

This year, their biggest project is “to endow an award in honor of Pace’s first black graduate, Judge Clyde Reese,” said Ross Brown, who is currently serving as president of the association as well as an award co-chair with Linder and Lee.

“This award is truly based on the vision of Kevin Linder,” said Brown. “He has provided an extreme amount of support, passion and leadership with getting this award off the ground.”

In an interview that appeared in the Summer 2019 issue of the Knight Times, Alumni Relations Manager Hayley Shoji interviewed Linder to ask what the creation of this association and this award meant to him. “I really hope that the Association of Black Alumni will be an integral part of the alumni network,” he said. “As Pace continues to increase diversity in all of its shapes and forms, we will continue to partner with Joanne Brown to interact with students and to be a support for black students before and after graduation… Our shared experience is very powerful.”

The Clyde L. Reese III ’76 Book Award will be given during the annual upper school Honors Day assembly (this year being held on May 7) to a sophomore or junior nominated by faculty and staff who is then chosen by the Association for Black Alumni.

As for the criteria, the student must have a “sincere and genuine interest to want to make Pace an inclusive environment,” said Mrs. Brown. “I can think of off the top of my head a number of student leaders that are really passionate about inclusion work in the school community. It comes from a sincere place and has nothing to do with being recognized publicly, but all about how they are trying to create an environment where everybody feels like they belong and that their voices are heard.”

“This isn’t a black award or a Latino award or a white award,” said Linder. “This is an award for someone who celebrates diversity in all forms. We’ve never had an award like this at Pace, and it is a big way to tell people that Pace is an inclusive community, and that the alumni are here for the students.”

Unlike many of the awards that are either in memoriam of a person or given by colleges, this award is unique to the Pace community as it celebrates a part of our history. “The demographics of the school have changed so much since any of the board members were students at Pace, and we as a group wanted to create something that acknowledges Pace’s progress and those students that are helping to move the school forward,” said Mr. Brown.

“The concept of the award is surprising and extremely gratifying,” said Judge Reese. “I also am wholeheartedly in agreement that the award should be open to each and every student in the applicable class range.” Judge Reese is also grateful for his cousin, Marsha Reese, and her cousin, Al Brown, who attended Pace with him from 1969 – 1976.

“Pace has come a long way in how it celebrates and acknowledges diversity,” said Linder, “And we want to honor the students who continue to work to promote diversity within our community.”