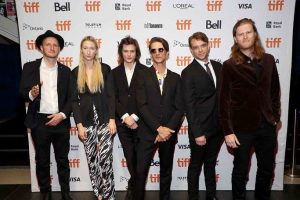 Lumineers frontmen and actors from the short film “III” pose at the Toronto International Film Festival. Photo: @thelumineers on Instagram

In the technological age, many artists are looking towards updating their marketing techniques to reach a larger audience, causing them to find creative new ways to incorporate their music into the public sphere. One of the most recent examples of this is The Lumineers’ most recent album, “III,” which was released in its entirety on Sept. 13.

Over a period of six months, “III” gradually made its way into the world, split into three major chapters. Each one of these chapters focuses on one member of the fictional Sparks family: Gloria, her son Jimmy and her grandson Junior. The Lumineers have always been creative in the way that they promote their music, however, for this album they used even more innovative techniques to reach a larger audience and help spread their message about addiction.

In the album, The Lumineers explore Gloria’s battle with addiction and its effect on her close family. Wesley Schultz and Jeremiah Fraites, the band’s two leading men, have both seen the effects of addiction on family firsthand, and they know that a large percentage of the population will be able to relate to this music. In order to reach this group of people, especially those who have not been fans of The Lumineers in the past, the group put in extra effort to make sure their message is heard.

In addition to the album, The Lumineers created a short film to accompany the music and to help clarify some of the details presented in each song. This 44-minute movie, also titled “III,” has received a great deal of attention so far, especially given that it has yet to be released to the public. Part of the reason for this is that “III“ was recently featured at the Toronto International Film Festival (TIFF).

While waiting for the full video to drop, listeners have had access to pieces of the film, which make up each music video. The band created some anticipation for these videos by using the “premiere” feature on YouTube, releasing one video daily directly after the launch of each chapter of “III.”

The Lumineers have also worked in collaboration with Spotify to “take over” certain playlists created by Spotify, such as “Dark & Stormy,” “Rainy Day” and “Scenic Drive.” The songs on these playlists reflect the tone of “III” and each begins with a song from a chapter of the album.

The group also took this a step further on the “Roots Rising” playlist, where Schultz and Fraites worked with the Spotify team to film live versions of some of the songs featured on “III.” During these short videos located within the playlist, they discuss their inspiration for each song and how it has affected them personally.

All of these creative new measures to spread the word about their work may be unique, but other artists that have had much more exposure in their lifetime are also beginning to move in new directions. Bruce Springsteen has released several films over the span of his nearly 50-year career, however, his newest film “Western Stars,” which was released on Oct. 25 of this year, expands upon his album of the same name, which was released in mid-June.

In this movie, which was also shown at TIFF, Springsteen explores and discusses his career and features a live version of each of the songs that are in the album. A major factor in his decision to make and release “Western Stars” is that this album is not going to be followed by a tour, which according to Rolling Stone, “is the first…since 1982’s ‘Nebraska.’”

On a different note, some bands have risen in popularity in the wake of a large number of copyright claims issued by Universal Music Group. One of these bands, Surfaces, has grown because of their open access music and the ease YouTubers can add this music to the “intros” and “outros” of their videos. The constant presence of their music in videos made by creators popular among high school-aged girls has allowed them to become popular within that demographic.

One of these YouTubers, Hannah Meloche, was even featured in Surfaces’ music video for their song, “Sunday Best.” Their tour stop in Atlanta was originally supposed to take place at Aisle 5, and tickets were set at $15. These tickets sold out during pre-sale, prompting the band to move their Jan. 3 concert to Buckhead Theatre.

Although these creative marketing techniques are being used by lesser known artists, big names such as Ed Sheeran, Drake and Zara Larsson have been using more social media-based marketing for years.