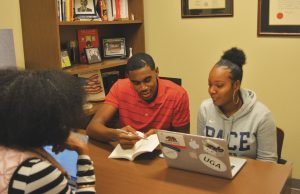 According to Director of Diversity and Inclusion Joanne Brown, an alliance is defined as “a group that brings together students who share a common identity and those who stand in solidarity with that group.”

A common thread within the alliances is the hope to be able to educate the general student body. “We’re planning on doing assemblies,” said junior Cole Middleton, one of the leaders of the BSA. “For Black History Month, we’re going to be the ones running all the assemblies, any activities that happen, posters and things that go up around the school, anything on the TVs.”

Senior Sydney Thomas is also a leader of the BSA. “At BSA, we plan on working together to do some community service projects to try to help some of our members get their community service hours before senior year,” she said. “One thing we’ve worked on already is the Bahamian project with [junior] Christian Bing and [ICGL Associate Director] Ted Ward.”

The project consisted of soliciting donations from the Pace community for Bahamian people affected by Hurricane Dorian. BSA members painted large boxes for the donations and transported the donated items to the Bahamian consulate in Atlanta for distribution to people in need. The BSA leaders also cited discussion as one of their focuses.

Sophomore Allison Silverboard, one of the leaders of GSA, described GSA as “an association that aims to spread awareness of LGBTQ+ issues and spread acceptance and inclusion, while giving back to our community.” The group has been active for years now, and each year new students are welcomed into the fold. “It’s a place where LGBTQ+ students can find support and acceptance from their peers,” said Silverboard. “It’s like an unofficial family.”

However, Silverboard acknowledged that GSA occasionally has some problems garnering support. “It feels like sometimes people don’t want to come to GSA because they’re scared to be perceived as gay.” She cited this belief as untrue, and said that there were plenty of straight people that attend the group’s biweekly meetings. “GSA welcomes all people at Pace, even if you don’t identify with the LGBTQ+ community,” she said. “I just wish [that more people knew that].”

Founded in early September, the HSA is the newest alliance. Senior Jesus Tadeo Pineda is one of the leaders. He cited the group’s focus as “[being a safe space] for Hispanic students to talk about their culture, and share their culture with other people and with the rest of the school.” He noted that they “welcome all cultures.”

Many of the Hispanic students at Pace recently showcased their cultures during an assembly for Hispanic Heritage Month, which concluded with a dance that drew loud applause.

“Since it’s our first year, we just want to kind of get the basics down for the club, for an alliance, you know?” said Tadeo Pineda. “And to create a safe space for Hispanic and Latino students, or just anyone who wants or needs a safe space.”

Spanish teacher Paula Pontes is the sponsor for the ISA, which she started in Spring 2009. She created the ISA to support international students who are first or second generation immigrants to the United States. According to Dr. Pontes, families and students have come from countries as close to Atlanta as Mexico and as far away as South Korea.