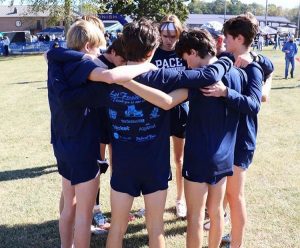 The team has a pre-race huddle to get pumped up. Photo: Emily Giffin

The boys entered the GHSA 3-A state championship meet on Nov. 2 coming off an outstanding performance at the region championship where they beat both Westminster and Lovett. With that said, the Knights had high hopes at state that went unfulfilled. The team finished with 76 points, losing by only two points to Westminster’s 74. Still, the boys showed great progress compared to the team’s fourth place finish last year.

Senior George Adams led the charge and finished third overall. Right behind him was sophomore Edward Blaha who finished sixth, making him the best sophomore in the AAA division. Coming up huge for the Knights, junior Robert “House” Houser, placed 17th and third for the team. Rounding out the top five for Pace were senior Sam Adams and sophomore George Blaha.

The girls team was unsure about what they could do after a third place finish at the region championship. Sophomore Laura Arenth did what she had done all year, finishing fourth overall and first for the Knights. Senior Payton Payne completed the course just eight seconds later, earning her the sixth place medal individually.

After sitting out the start of the season due to injury, junior Laura Romig helped the Knights tremendously with a 12th place finish. Senior Paula Sandoval ended her cross country career with a great race when it mattered most, placing 14th. Rounding out the top five for the girls was sophomore Jordan White, placing 19th, which put all of Pace’s top five girls in the top 20.