‘She Kills Monsters’ a Great Start to Year in Pace Theatre 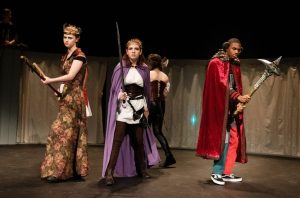 Comedy, violence, love and death are elements that are not always combined in one theater production. “She Kills Monsters” utilizes all of these contrasting components in the form of sexuality, video games and fighting scenes. The upper school cast successfully performed this rather difficult play last week on Oct. 22-24 and came away with the region championship.

Many people do not realize that the One Act is actually a Georgia High School Association sanctioned event that has a state championship where a school is crowned as champion. The Pace squad won the Region 5-AAA championship on Oct. 24, which earns them a bid to the state championship.

The play is set in 1995 and paints a picture of an American teen. The main character Agnes Evans, played by junior Audrey Holton, is a popular cheerleader with a boyfriend on the football team. She seems to have a perfect life but then her younger sister Tilly dies in a car accident. Tilley, played by senior Lauren O’Sullivan, happened to be more of an introvert, a geek who played “Dungeons and Dragons” in her spare time. The dynamic between the two is interesting as they are almost polar opposites.

After Tilly’s death, Agnes finds what she thinks is a game Tilley created which ends up containing all of Tilley’s deepest secrets. Agnes has no idea what the game code means so she gets to know a nerd that loves “Dungeons and Dragons.” Chuck Diggs, played by senior Jackson Grey, becomes a key player as Dragon Master in Agnes’ effort to decipher her sister’s game.

Throughout the play, there is conflict between Miles, Agnes’ boyfriend played by junior Jack Carson, and Chuck. Agnes and Chuck hang out a lot because they are trying to understand the game and this comes as a surprise to Miles. Miles has feelings of anger and jealously that lead him to reflect on his relationship with Agnes. He concludes that she is worth hanging in with and begins getting more involved in her affairs, which is a sweet note in the play.

The game that Agnes plays reveals secrets from Tilly’s life that she never knew. It turns out that Tilly was homosexual. Now, Agnes was not ready for this information and she freaked out. This definitely added a mature element to the play. An interesting and symbolic detail comes when Agnes accepts her sister for who she was and changes her outfit. The old outfit, which was a cheerleader uniform, turns into a sweater and jeans, a more granola style.

Holton, O’Sullivan and junior Denzel Welsh stood out through their acting and dialogue. The three brought emotion and a true sense of life to the play. The two leads, Holton and O’Sullivan, handled the relatively difficult roles well and showed passion through their characters. Welsh brought great comedy to the play as he performed as the lazy, television-addicted Orcus.

Other actors enhanced the play in subtle ways. Throughout the play, juniors Alivia Wynn and Jack Brown were hilarious and generated laughs on multiple occasions. Along with Holton and O’Sullivan, seniors Madison Edwards and Emerson Barrett were involved in the fighting scenes, which generated action and excitement.

Overall, the play was great and combined serious topics with light, funny dialogue at times. The team has already started preparing for the state championship, to be held at Mary Persons High School in Forsyth, Georgia on Saturday, Nov. 9.