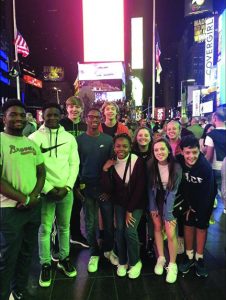 Over fall break, students left their textbooks at home and traveled to New York City on a theatre trip with US Visual & Performing Arts Chairperson Sean Bryan. Although Pace stages its own plays and musicals every year, theatre trips such as this one give students the opportunity to learn from other actors and directors and see top-tier professional productions.

A total of 10 students ranging from grades nine through 11 boarded a two-hour flight to New York City on Oct. 11 with the goal of experiencing Broadway. The two oldest students on the trip were juniors Denzel Washington and Alivia Winn.

The trip was Winn’s first time in New York City and she not only enjoyed learning, but the city itself. “It was exciting to walk around the bright lights of Times Square,” she said. Washington has been to New York City before, but it was a different experience for him as the group went to multiple Broadway shows and an acting workshop. “My favorite Broadway production was ‘The Play that Goes Wrong’ or ‘Harry Potter and the Cursed Child.’” he said.

The group was able to see four shows over the break, including Tony Award winner for Best Musical of 2019 “Hadestown,” “The Play that Goes Wrong,” “The Rose Tattoo” and “Harry Potter and the Cursed Child,” Parts 1 and 2. Additionally, the students toured Radio City Music Hall, an entertainment venue that serves as home to the Rocketts, a prestigious dance group. The group also participated in a workshop led by actor Jamyl Dobson.

Both Washington and Winn got involved in theatre early on. Washington got into theater through an acting class freshman year. “In the class, I got to participate in improv scenes which first got me interested,” he said. Winn got involved because “[she] thought it would be a fun middle school activity.” However, this activity blossomed into a passion.

Senior Nikki Rubin attended this Broadway trip her junior year and it was “the highlight of [her] year.” She recommends this trip for anyone new interested in music saying, “this trip was a really great bonding experience. The chorus students and we share funny memories from the trip on a daily basis.”