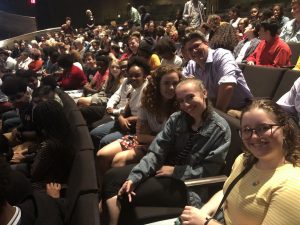 Although Pace holds their own plays and musicals each year, on occasion, students have the opportunity to experience and learn from other actors and directors. On Oct. 3, eight upper school students traveled to the Alliance Theatre in Midtown to watch the world premiere of the musical “Becoming Nancy.” These students, along with US Visual & Performing Arts Chairperson Sean Bryan, spent the school day off campus to learn from the musical and experience the world of “Becoming Nancy.”

The story, based on the 2011 book by Terry Ronald, takes place in 1979 in the South London suburb of East Dulwich. David Starr, the main character of “Becoming Nancy,” is a smart and talented 12th grade boy. However, when he is given the female lead in his school’s play, “Oliver,” he struggles to make a decision regarding what he should do. As his parents, friends and townspeople all have an opinion about him playing a female role, David becomes confused, and even becomes unsure of who he is.

“Becoming Nancy” explores themes of family bonds, first loves and the courage to be yourself, which are all relevant to Pace students. Through the story of David, the viewers can see how discrimination on the basis of race, gender and sexuality affect communities, like that of East Dulwich.

The story also explores the love that forms between David and his co-star in the school play, Maxie, who are both coming to terms with becoming gay in a society that does not allow homosexuality. “It was illegal to be gay in London at the time, and the characters’ parents are homophobic, so they both have to keep who they are a secret,” said senior Allie Appel, who has already seen the musical twice. “It is really a coming of age story about David and Maxie being gay and what that means for them.”

Although the story takes place in 1979, many of the issues presented are common today and affect the communities that even Pace students live in. “It is a really cool story because it touches on a lot of modern issues, like those of race and the LGBT community, that still matter today,” said junior Olivia Ullman.

Ullman, who was not a part of the field trip on Oct. 3, still went on her own and highly recommends the musical to all. “It is a show that has something for everyone, no matter how old or young the viewers are,” said Ullman. “I think especially as teenagers, though, we all see these issues around us.”

Another aspect of the show that was appealing to viewers was the set design and employment of different lighting to stage different scenes. The crew of “Becoming Nancy” truly was able to transform the Alliance Theatre’s brand new Coca-Cola Stage to make the audience feel as if they were actually in London in the ’70s. “I really enjoyed the use of light in the show, as the stage would change colors depending on the mood of the scene or to represent different characters,” said junior Denzel Welsh.

Four students, including Ullman and Welsh, as well as juniors Laura Romig and Alivia Wynn, also had the opportunity to meet the director of “Becoming Nancy,” Jerry Mitchell, on Sept. 13. Mr. Mitchell is a director and choreographer who has worked on musicals including “Grease” and “Hairspray.” In 2013, he won the Tony Award for Best Direction of a Musical for “Kinky Boots.”

“Meeting him showed us how much work actually goes into the musical,” said Ullman. “We also got to see how down to earth he really is.”

When the group went to the Alliance Theatre last week, they were not the only high school students there. “I think one of the best parts was, we saw it with a bunch of other students from high schools around Atlanta,” said Romig. “It felt different than any other theater experiences because everyone was falling in love with the characters and the story together. It is so unique and enthralling and I’m really proud that it came from our city and our Alliance Theatre.”

One of the main themes that the musical promotes is that “you matter.” No matter who you are, what your background is, or what you want to do with your life, it is important to be yourself and never change that for anyone. “I really took away the message that you shouldn’t care what other people say about you,” said Appel. “You just have to rely on yourself and be your own person.”

Overall, students have loved the production due to its applicability to their lives and how amazing the performances are. “The music is moving, the choreography is jaw dropping, and the message is truly universal,” said Wynn, who has seen the show three times so far. “Every time I went I really did leave feeling like I matter.”

As the production at the Alliance Theatre closed on Oct. 6, students and community members alike are both hoping this is not the last they will see of “Becoming Nancy.” “It is a show that is destined for Broadway,” said Wynn.