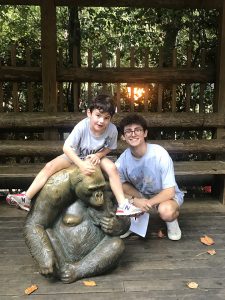 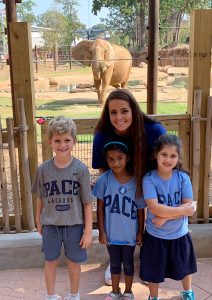 When senior Ada Jane Agolli tried to observe the birds, one flew into her face and frightened her. Photo: Zachary Howard

Zoo Atlanta, located in Grant Park, is home to 10 of the world’s critically endangered animals, including the Sumatran tiger of Southeast Asia, the western lowland gorilla of West Africa, and the radiated tortoise of Madagascar. The National Wildlife Federation asserts that human activity threatens the survival of these animals in the wild, from “directly destroying habitat to spreading invasive species and disease.”

In conjunction with their curriculum, the senior Advanced Placement Environmental Science (APES) students took a field trip on Oct. 1 to Zoo Atlanta in order to learn more about the world’s biodiversity that they have been studying in class. Since the first unit, the APES course examines Earth’s biomes and relationships among different species. On the zoo trip, students were able to explore these ideas in a real-world simulation.

Atypical of other high school field trips, pre-first students accompanied the seniors for the 11th consecutive year, celebrating the union of Pace’s youngest and oldest Knights. Seniors and pre-firsters explored in pairs or groups on their own, with parent chaperones throughout the zoo.

“My favorite part was seeing how excited the little kids were to see their favorite animals,” said senior Meghan McMillin. “It reminded me of how much I used to obsess over animals when I was younger. It was also cool to go to the zoo since I hadn’t been in over 10 years.”

In addition to bonding with young students and practicing her leadership skills, McMillin learned a lot of interesting information. “One of the coolest things I learned is that you can tell the difference between a two-toed and three-toed sloth by looking at their fur,” she said. “Two-toed sloths have brown around their eyes.”

Other seniors commented on how being with the pre-firsters positively impacted their adventure. “My favorite part of the day was playing hide-and-go-seek with Chloe, one of the pre-first students I was paired with,” said senior Spencyr Aronson. “She was so cute, and I think she had a great time seeing all the animals like my friends and I did.”

Aronson also shared what happened when students were not actively observing the animals. After their lunch of sandwiches, chips and apples, the students were craving desserts. “We spent a really long time looking for Dippin-Dots, only to find out the stand was closed,” said Aronson. “We got slushies instead.”

After the pre-firsters said goodbye to their new senior friends and left the zoo, the APES students had more time to analyze the animals and converse with Zoo Atlanta personnel.

On the way back to Pace, students connected what they had just experienced at the zoo to their work in Kevin Ballard’s APES classroom. “I think the field trip was helpful because I got to see how animals actually react to things and maneuver around them in person,” said senior Reign Watkins.

Mr. Ballard hopes his students seized a good opportunity to learn about several types of animals by direct observation, even if they were in a captive setting. “The seniors got a chance to see the zoo through the un-jaded eyes of little children,” said Mr. Ballard.

The trip also inspired some students to form an opinion on an ongoing debate topic: are zoos harmful or helpful to animals? People for the Ethical Treatment of Animals (PETA) posted a statement online that reads: “While confining animals to zoos keeps them alive, it does nothing to protect wild populations or their habitats.”

Senior Jeremy Leven identifies with this sentiment regarding the effects of putting animals in zoos. “The living environments for most of the animals seemed pretty trashy, and it was just really sad to see animals in captivity, displaced from their natural homes,” said Leven.