What a Difference Four Years Make 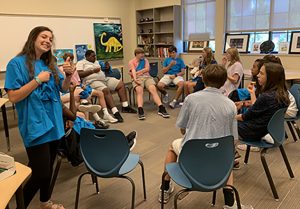 Just before school started, I had the privilege of attending the ninth grade retreat at Camp Skyline as one of the 18 senior peer leaders. It was a weekend jam-packed with activity, social opportunities and, for our incoming high school freshmen, looking ahead. For me, it was also a chance to look back and think about my own experiences as I stood in those freshman shoes.

I do not recall much about my beginnings of high school that August 2016 but I can recall every detail of that first morning of the mandatory ninth grade retreat as if it were yesterday. We had just moved from New York City to Atlanta and I did not know a soul. I remember with such clarity the emotions raging within me as I got out of my parents’ car to join the group assembling in the early morning mist of the Pace parking lot. I was anxious beyond description and I could not believe that I was being thrown into my new surroundings in such a drastic way.

I stood alone at the edges of the larger group, noting the ease with which the returning Pace students surrounding me reconnected with each other after the summer break and wishing that I could just be back in New York amongst the close friends I had left behind a few weeks earlier. I recall my growing discomfort as the minutes passed, and the feeling that I wanted to be anywhere but there, when – out of nowhere – a peer leader walked up to me with a big smile and stuck out his hand to welcome me.

To this day, I do not know whether it was fortuitous or by design (because “anxiety” must have been written all over me) but before I had time to give it more thought, Rob Warren [’17] had me deep in conversation about the weekend trip ahead and the fun things being planned. The conversation continued as we boarded the bus, eliminating that awkward, where-do-I-sit moment entirely and, by the time we reached the border of Alabama, we had already figured out that we were both lacrosse players and he had already sought out a few other freshmen who would be playing alongside me that spring.

By the end of the three-day retreat, in addition to making some friends, I had the confidence in knowing that when school started that next week, the senior peer leaders who had guided our weekend would be waiting there in the hallways of Pace to answer the questions that I would be too afraid to ask, to help me decipher my indecipherable, rotating schedule, and to be the familiar face in a crowd of new faces. I drew on that experience as I drove myself over to the Pace parking lot early in the morning to join our team of peer leaders who would be guiding the Class of 2024 retreat.

We waited together, this group of 18 of us who, over the last three years, had now become friends and who had bonded even more during our peer leadership retreat the first two days of August. Under the guidance of peer leader advisors Michael Callahan and Sara Eden, we had armed ourselves with well-planned strategies for the weekend, including social icebreakers, action-packed activity from lawn games to pool time, sessions devoted to understanding the mechanics of high school, and so much more. We were ready to assume the role of the peer leaders who had guided us so thoughtfully three years before.

I scanned the crowd of freshmen who had started to assemble, taking it all in until I found him. Standing there at the fringe of the group, just where I had stood three years earlier. Walking up to him, I conjured up images of that first welcome and extended my hand with a smile, “Hi, I’m Ben! Welcome to Pace!”

As we boarded the bus alongside each other, knee-deep already in conversation about where he had transferred from and why, I could not help but think about how good it felt to channel the leadership of those who had guided me three years earlier and hope that this new-to-Pace freshman sitting beside me might one day be able to do the same.