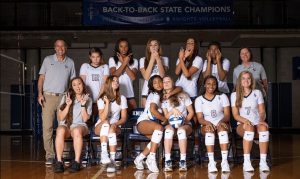 The varsity volleyball team began their season in August playing against some of their toughest opponents. In preparation for the year, the girls worked on their own, at different club teams around Atlanta as well as in open gyms and private lessons to improve their game.

Six of the girls on the team play together on A5 club teams, with seniors Dominique Turner and Lucy Ferry on one team and Sasha Ratliff and Ada Jane Agolli on another team. Junior Kalissa Greene and sophomore Morgan Neill play A5 as well.

This year’s team is different than in past years. “We only have 10 people on the team which is small for us, making staying healthy a primary concern,” said head coach Anna Bush. Six players are on the court at a time, and the libero, the player wearing a different color jersey, is constantly subbing for hitters in the back row. This leaves the team with only three subs on the bench at any given time.

The team gained only three new players this season, with seven players returning. Agolli, Ratliff and Turner have already committed to play Division One volleyball at Brown University, University of San Diego and Marshall University, respectively.

Three of the four seniors have played on varsity since freshman year. “It feels like a new set of responsibilities that I have to take on to help the new girls,” said Turner. It will be their job to keep the team on an even keel during the regional and state tournaments coming up on Oct. 7 and Oct.19, respectively. “There’s a lot of volleyball experience and leadership skills in this senior class,” said Coach Bush. “They are the most talented senior class we have ever had.”

The three main hitters are Agolli, Ratliff and Ferry, all of whom are over six feet and create a wall at the net for blocking.  Greene is a nationally recognized setter, constantly setting her teammates up for a perfect spike. Last season, Greene was named All State MVP, AAA Player of the Year, and a member of the AAU All American team (16 Open). Turner, the libero, is the team’s primary digger and can be subbed in and out for anyone at anytime. Turner last year surpassed 1000 digs and continues to improve this statistic.

The group understands that volleyball is all about team chemistry and being on the same page. The small size of the team has led the girls to develop a strong bond. “The season is super fun because we are all very close, and have all developed friendships,” said Neill.

Coming back to the season having won the state championship the past two years, the girls are feeling the pressure to make it a three-peat. “I set the tone that we have not done anything yet,” said Coach Bush. “I want to make sure we do not look past any opponent.” “Returning as a senior after winning back-to-back gives me and others a sense of unfinished business,” said Turner.

As of press time on Sept. 21, the team’s record is 22-8. The team began the season with a win over Hebron Christian for the first time in Pace history. After winning their first three games, the girls played in the Marist State Finalist Playdate, where only the state finalists from across Georgia competed. The girls got great competition, barely losing to McIntosh and Alpharetta and beating Harrison. The team closed out going 6-3, and although they lost to Westminster, state championship runner-up for back-to-back years, they may get a rematch later this season.

The girls headed to South Carolina on Sept. 13 to compete in a tournament at Dorman High School. They went 6-2 and won the Silver Championship bracket. Greene and Ratliff were named All-Tournament players. Last weekend, the Knights earned the title of 2019 Lovett Block Party champions, beating six schools, including Alpharetta in the final.