Use Caution with Your Number Neighbor 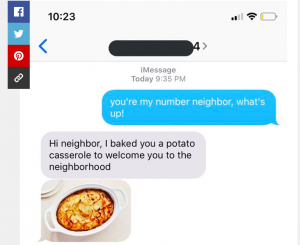 Thousands of people have been posting screenshots of their conversations with their number neighbors after the trend went viral. Photo: Jonas Grinevičius and Ilona Baliūnaitė (boredpanda.com)

Over the summer, popular trends like raiding Area 51 and texting number neighbors overloaded the internet. Though both trends amassed huge followings, the latter had to do with reaching out to strangers and attempting to begin conversations with them. Number neighbors, or text-door neighbors, are people who have the same phone number other than the last digit; the last digit is one number higher or lower than the other.

Junior Casey Shoulberg learned about the trend after she saw a post from a friend saying that her number neighbor responded. Shoulberg decided she would text hers as well to see what would happen. “I honestly don’t know why I did it besides curiosity,” she said.

Shoulberg would not recommend others texting their number neighbors because of the uncertainty and her paranoia. “It kind of freaked me out by the end,” she said.

Senior Dominique Turner learned about number neighbors while scrolling through social media. “I found some funny texts between some people and their number neighbors, so I decided ‘why not try it myself?’ so I did,” she said. Unlike Shoulberg’s experience, Turner got a response the first time, and they “got to know each other a little.”

Although she texted the person again, Turner did not get a response. However, she still suggests that others try out the trend. “It’s something to do when you have nothing to do and just want someone to talk to,” said Turner.

At first glance, this trend seems like a fun and harmless activity, but according to some, it has the potential to be dangerous. In Los Angeles, a woman received death threats after playfully reaching out to her number neighbor. “The person on the other end of the text thread threatened to kill her in a series of terrifying messages, insisting that he was on his way to her house,” reported NBC. “She received videos of someone loading two different guns and more than 70 calls.”

This is just one extreme example of the potential dangers of the number neighbor trend. Pace computer specialist Matt Walker wants people to be more careful and pay more attention to their cyber safety. “Beyond the whole stranger danger sort of thing that everyone talks about when they are a little kid, from a security standpoint, you are immediately giving away two very crucial pieces of your online identification – your name and your phone number,” he said. “That is the stuff that can be used to reset passwords for accounts. And if you have a protracted conversation with this person, if they are able to draw more information out of you, then you are basically spoon feeding them all this potential information that they have to gain access to any sort of account.”

Mr. Walker advises to stay safe while participating in internet trends, and always “keep it online at arms’ length and semi-anonymized.” However, this does not necessarily ensure safety. “If people can impersonate a phone number to make a phone call, they can impersonate a phone number to send you a text message,” he said. Mr. Walker is urging everyone to be cautious when it comes to internet trends because “your number neighbor may not be your number neighbor at all.”