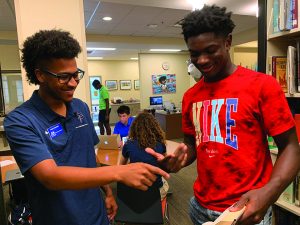 At the beginning of the school year, the Upper School welcomed a new addition to the library staff, Class of 2013 Pace graduate Tiger Brown. Following librarian Linda Teague’s retirement at the end of last school year, Tiger took MS/US Librarian Marty Hamburger’s place covering the lower library as Mr. Hamburger moved upstairs to replace Ms. Teague. Tiger graduated from Claremont McKenna College in 2017 and decided to take the job at Pace as library assistant while he pursues a career producing music during after-school hours.

Tiger described his return to the Pace Upper School as truly welcoming. “I’m coming back to a similar place, but it’s new in a lot of ways,” he said. “I love seeing all the kids come through and getting to interact with the students.” The students also love his young and friendly presence.

“I am known as my mom’s son here, which is different,” said Tiger. Tiger is the older son of Director of Diversity and Inclusion Joanne Brown. “It feels very strange and he constantly reminds me that he was here first,” said Mrs. Brown. “But I do love seeing him around school.” This is the first time Tiger and Mrs. Brown have shared the same campus, which is a big change for the duo since Tiger went to college on the West Coast and didn’t get to see his mother often.

Tiger is also a member of the football coaching staff at Pace. “He is an awesome coach who definitely tries to make practice fun,” said junior Ethan Greenberg. “I have also enjoyed seeing him when I walk through the library.” Being a former Pace football player and a defensive back for the Claremont-Mudd-Scripps team in college gives Tiger a great perspective from which to coach the players. “Having played for [Pace coaches] Slade and Johnson, I understand how they coach so I can really translate it to the players,” said Tiger. He says he’s still learning and looks forward to growing as a coach.

Although he likes to relax and play video games outside of school, Tiger’s real passion is music. On top of his work at Pace, he is trying to make a career out of producing music. His mom noted that he is so busy with music, he is hardly at home. “I am just trying to take it as far as I can go,” said Tiger about his longer term goals.