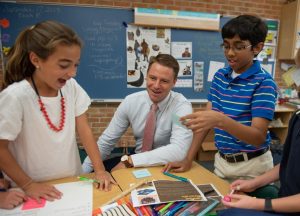 While Mr. Ward’s office is on the bottom floor of the Upper School, his job entails constant collaboration with all divisions. Here, he works with Pace sixth graders. Photo: Ryan Vihlen

“My grandfather was a probate judge in Henry County, Alabama during the ’60s,” said new Associate Director of the Isdell Center for Global Leadership (ICGL) Ted Ward. “I was born into that same privilege, and I decided I was going to try to lift people up with it.”

Recognizing his privilege from an early age is just one of the many influences on Mr. Ward’s commitment to global community outreach. Another is an experience he had as a student at Brookwood High School.

“In 2003, Brookwood High School was an affluent, upper-income, pretty white public school,” said Mr. Ward. “But while I was there, I got an opportunity to mentor some students at Radcliff Middle twice a week, where the population was mostly foreign-born kids. That experience is what opened my eyes not only to education, but also to how I could be involved in diverse education.”

After college, Mr. Ward began teaching at Peachtree Charter Middle School. He taught several inclusion courses where students with learning disabilities worked alongside general education students. During Mr. Ward’s tenure there, the school eventually tailored courses that welcomed students whose first language was not English as well. After a few years at Peachtree, he began teaching history at Dunwoody High School.

“You hear it all the time – to follow your passion – but I think it’s really difficult to know what exactly your passion is,” said Mr. Ward. “I got lucky in that I knew history was my thing.” But, in 2017, when Mr. Ward realized that there wasn’t room for him to expand and grow as a leader in education at Dunwoody, he started looking for a change. A job offer from the National Center for Civil and Human Rights was his opportunity. When asked why he chose this particular route, Mr. Ward circles back to his love of history.

“I had always been really interested in military history, like battles and weapons and stuff like that,” said Mr. Ward. “And then I became pretty empowered by the Civil Rights Movement. It wasn’t just the racial tension aspect, but actually how a group of people could change not just their own outcomes but also societal outcomes without conflict. All of my interest in history up to that point was based on bloodshed, but this was just as significant.”

His two-year tenure at the Center was both impactful and productive, but Mr. Ward still did not feel like it was as expansive or robust a job as he had envisioned for himself. His ongoing collaboration during the 2018-2019 school year with Pace’s Director of Diversity and Inclusion Joanne Brown piqued his interest in working full-time at Pace.

In July 2019, Mr. Ward officially joined the Pace faculty full-time. “While Ted’s role is to lead Pace in global initiatives and community engagement, he will also be a tremendous resource for the work of diversity, equity and inclusion,” said Mrs. Brown. “His personal and professional experience around this work will provide an important lens to all that he does for and with us at Pace.”

Shaped by experiences where he has worked to break down the walls that divide society, Mr. Ward’s mission at Pace is to build bridges that connect Pace students to different subsections of a much wider, diverse community. “Ted’s background at the National Center for Civil and Human Rights serves as a wonderful starting place to think about global issues,” said ICGL Director Tricia Anderson. “As a native of Atlanta, a previous teacher and an educator at the Center, he has developed incredibly deep relationships with local communities and nonprofits. He is used to thinking about local issues from a global perspective, and that’s precisely what we aim to do in the ICGL.”

With an array of different responsibilities under his job description, including everything from the Community Engagement Council to the ICGL student council, Mr. Ward is excited to bring some of his own ideas to Pace’s existing engagement programs. One of his biggest goals for the next five years is to get outside of the zip code 30327.

“That’s the challenge I’ve given myself from Day 1: to provide the students with as many different opportunities with as many different organizations as possible,” said Mr. Ward. “I want Pace to engage in a meaningful way with every single zip code of Atlanta.” Most would argue that’s quite an ambitious goal, but Pace’s ability to think big is precisely why he loves working here.