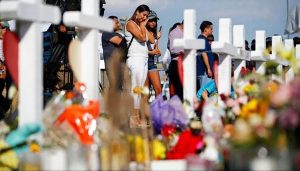 Men and women gather outside of the Walmart in El Paso, Texas on Aug. 6, three days after the devastating mass shooting. Photo: wikimedia.org

On Aug. 31, people in Odessa, Texas experienced a devastating mass shooting that rocked their community. Gunman Seth Ator, 36, opened fire, killing seven people and injuring an additional 25. Ator seized a U.S. Postal Service vehicle, killing a postal service employee and shooting at people as he drove. Ator had been arrested in 2001 and had previously failed a background check, making him ineligible to acquire a weapon. Despite his failed check, Ator used a legal loophole to purchase a gun through a private seller.

This was the third mass shooting in the month of August alone. On Aug. 3 in El Paso, Texas, a shooter opened fire in a Walmart, killing 22 people and injuring at least 27. The shooting began at 11 a.m. and the gunman primarily targeted Mexicans. Later that day, an online manifesto posted by the shooter revealed that the gunman was xenophobic, racist, and believed that “Latin immigrants were overrunning America.” Among the 22 deaths, seven were Mexican citizens. The Mexican government is now demanding better protection for all Mexicans living in America.

Less than 24 hours later, on Aug. 4, a gunman shot up Ned Peppers Bar in Dayton, Ohio. Nine people were killed along with 27 people injured. The shooter, Connor Betts, a 24-year-old white male, was killed by police officers within minutes of the first shots being fired. Betts’ sister, Megan Betts, was one of his victims, as she was present in the bar at the time of the shooting.

Thankfully, large corporations, including Dicks Sporting Goods, Levi Strauss & Co., and Uber are beginning to speak up. More than 145 CEOs sent a letter to the U.S. Senate on Sept. 12, advocating for universal background checks and stronger red flag laws. The red flag laws allow courts to order the removal of weapons from anyone who may pose as a threat to themselves or others. “Doing nothing about America’s gun violence crisis is simply unacceptable and it is time to stand with the American public on gun safety,” the CEOs said in their letter. In addition, they stressed that gun control is a bipartisan issue.

President Donald Trump’s stance on this issue is questionable. “We cannot let those killed in El Paso, Texas, and Dayton, Ohio, die in vain” said Trump. Although this seems positive, he has also mentioned that background checks in the United States are already strong. Trump’s stance on gun control is unclear, but he is assuring America that “legislation is moving forward.”

“Every day, 100 Americans are killed with guns and hundreds more are shot and injured” said Everytown for Gun Safety, a nonprofit that strongly supports “common-sense reforms to reduce gun violence.” Everytown explains that “nearly two-thirds of gun deaths are suicides” and almost 60% of U.S. citizens or their loved ones have encountered gun violence.

The solution is clear. There must be stricter laws that prevent people from having easy access to purchasing guns and using weapons with high capacity magazines. The U.S. House passed a bill in February that would require federal background checks for all firearms sales and transfers. On Sept. 11, the House Judiciary Committee approved three more bills, aimed at regulating large capacity magazines, preventing people convicted of a hate crime from obtaining a firearm, and providing grants to support state and local efforts to remove firearms from individuals deemed to be a danger to themselves or others. The full House is expected to vote on these bills later this month.

The Senate has yet to act, saying it will not take action on gun safety measures until it hears from the President where he stands on the issues. It is imperative that Congress take action to pass stricter gun safety laws. Gun control is not a partisan issue; therefore, every man and woman, no matter their party, should be in support of regulating these weapons.