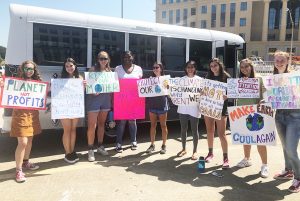 Nine Pace upper school students joined hundreds of other protestors of all ages at the Georgia State Capitol in downtown Atlanta last Friday in support of a global youth climate strike. Organized by Zero Hour Georgia, the strike and demonstration in Atlanta was one of more than 2,500 such events held around the world, with over 4 million people participating, according to Vox.com.

“It was awesome to be able to see everyone come together over such an important issue and I’m so glad that Pace participated,” said senior Maya Kaplan. Accompanied by Associate Director of the Isdell Center for Global Leadership (ICGL) Ted Ward, Director of Diversity and Inclusion Joanne Brown and ICGL Director Tricia Anderson, students left campus around 1 p.m. to participate in the strike.

The strike’s focus was to advocate for governmental leaders and lawmakers to implement more environmentally focused policies and legislation to combat climate change. The event was in anticipation of the United Nations climate assembly this week.

Sophomore and avid environmentalist Allison Silverboard was one of the students who attended the strike. She believes that in order to be successful in combating climate change, we must see “legislation being made and put into place to change the current rules of our system.”

Allison also touched on the systemtic change needed by corporations. “Corporations cause most of the carbon emissions,” she said. “It’s important for young people to strike because it raises awareness and gets peoples’ attention about a significant issue that must be solved.”

Pace representation at the global climate strike was a collaboration between the ICGL Scholars and Fellows, the Social Justice Club leaders, and the Pace Academy Board of Diversity leaders. Once students showed interest in the cause, Ms. Anderson then arranged the field trip.

Chaperones expressed their delight in the students taking the initiative to lobby for change. “Cultivating the skills of activism and insights into how activism can be effective in changing perspective and policy is really important for young people,” said Mr. Ward. “The idea that we would have students engaging in this meant that I wanted to be a part of it right off the bat.”

“I think it’s really inspiring,” said Mrs. Brown on the activism of the younger generation. “I think it’s great, but it’s sad that young people are having to take up the mantle that perhaps my generation may have dropped the ball on.” Although change in legislation is not always the immediate outcome of protests and strikes, those who attended the Zero Hour Climate Strike hope that their efforts will at least bring the issue of climate change to the forefront of peoples’ minds.