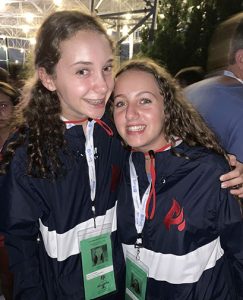 This past summer, young Jewish athletes from around the world congregated in Atlanta Jul. 28-Aug. 2 for the annual Jewish Community Center (JCC) Maccabi Games, an Olympic-style sporting competition for kids aged 12-16. Of the 1,600 participants, 21 were Pace upper school students.

The JCC Maccabi Games began in Memphis in 1982 and have since grown into a highlight of modern American Jewish life. The games began with an elaborate opening ceremony of torches and grand entrances. Over five days, the athletes competed in sports including baseball, basketball, flag football, soccer, tennis, volleyball and seven others.

The athletes spent their free time learning, participating in community service and socializing, all geared to strengthen their Jewish values and connection with others in the community. The service this year benefited the Shepherd Center in Atlanta and the Israel Sport Center for the Disabled.

The week was centered around two hubs in Atlanta: the Marcus Jewish Community Center (MJCCA) and the Marist School. Buses drove athletes and fans back and forth from those sites to their games. Dining halls were located at both hubs, but food was abundant at all venues.

Out-of-state and international athletes were housed by local host families. “Kids from different cities live in the homes of families who live in Atlanta,” said sophomore Margo Kaye, who competed on the 16U girls basketball team. “The families take the kids to their games in the morning, and basically anywhere else they need to go. On one night they bring their host kids to an activity of their choice, such as a pool party or fun dinner.”

Sophomores and twin brothers Will and Matthew Aronson played basketball. “All the food was kosher, we had the opportunity to put on tefillin, lots of people wore kippahs, and team Israel was there,” said Will Aronson. “The Jewish part of Maccabi was very noticeable and appreciated at the games.”

Athletes also engaged in Jewish dialogue together after watching a film about the Munich 11. “The Munich 11 were the 11 Israeli Olympic athletes who were killed by terrorists,” said junior Charlie Janko, who played basketball at the games. “It made me realize how lucky I was to be able to still compete in the sports that I love.”

The week’s events and rivalry ended with closing ceremonies and a huge party at the Mercedes-Benz Stadium on Aug. 1. The pop band AJR performed and stuck around for an exclusive meet-and-greet. Sophomore Marissa Goodman, who played tennis, said the party was her favorite part of the event.

Next year’s Maccabi Games will be held in San Diego, California on Aug. 2-7. Visit their website to register at www.sdmaccabi2020.org.