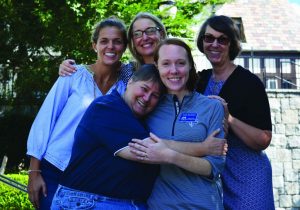 Every August, new faces join the Pace community and begin to acclimate to their new surroundings. In addition to the influx of new students, nine new members of the upper school faculty are also adjusting to their new school. Including a new Associate Director of the Isdell Center for Global Leadership and a new Director of Speech and Debate, there are new staff to meet in every department.

Betsy Costley joined the science department as a new Conceptual Physics and Math Physics Honors teacher. She moved to Atlanta in 2012, but then moved to California in 2016 for her husband’s job. After living there for two years and working for IXL, an educational technology company, Mrs. Costley and her husband moved back to Atlanta. Last year, Mrs. Costley worked at Pace as a long-term substitute teaching Conceptual Physics.

Mrs. Costley attended American University where she earned a bachelor’s degree in physics. Although she went to college to study political science, she fell in love with physics after taking a general education class. “I had several professors who were really passionate about students’ learning about about physics in general, and that really resonated with me,” said Mrs. Costley. “Their example sparked [my] love of teaching and physics.”

In addition to physics, Mrs. Costley is passionate about astronomy. She loves how the general physics laws she is teaching her students can explain extraordinary phenomena like the formation of planets and how stars move. She also enjoys playing board games like “Pandemic” and “Gloomhaven,” as well as spending time with friends and family, cooking and knitting.

After subbing at Pace last year, Mrs. Costley realized that she “loved the sense of community.” She is very excited to learn the Pace traditions, especially Phlotilla. But mostly, Mrs. Costley is looking forward to getting to know her students and helping them succeed in physics. “I love getting to know what the students are passionate about and trying to bring that into the classroom,” she said.

New in the math department is Algebra I, Algebra II and Discrete Mathematics teacher Diane Hagner. She grew up in Buford, South Carolina where both of her parents served in the Marines. She earned her bachelor’s degree from the College of Charleston and a master’s degree from the College of William and Mary. Ms. Hagner served in the Navy where she used her strong science and math background to work in the Naval Nuclear Power Program.

It was in high school that Ms. Hagner fell in love with calculus. “I remember thinking I wish I could have a job where I could just do calculus all day,” she said. After teaching in the Navy, she realized she loved teaching and eventually became a teacher in Minneapolis, Minnesota. “Last year I taught BC Calculus, AB Calculus, and I was like, I kind of have my dream job. I’m doing calculus all day,” she said. She taught in Minneapolis for over 25 years before moving to Atlanta this past summer.

Two years ago when Ms. Hagner decided to move from Minnesota, she began looking at schools recommended to her by friends and family as well as a job search engine that sent her resume to Pace. She recognized Pace as the place she wanted to work while being shown around and interviewed. “What drew me into Pace was the people and the relationships,” she said. “It kind of felt like home when I was interviewing, and it just felt right.”

In addition to calculus, Ms. Hagner loves to bake, play tennis and golf and watch sports, especially SEC football. She is excited to go “to the student activities and [to] get to know them outside of the classroom.”

Mrs. Maravalli-Neiley moved to Atlanta in June, immediately after finishing the school year. Just days after, she married her now-husband Eric Neiley, an ice hockey player for the Atlanta Gladiators. In her free time, Mrs. Maravalli-Neiley loves to be outside and hike with her husband.

Two years ago, Mrs. Maravalli-Neiley came to Pace to tour. Though it did not work out then, she is now back in Atlanta and ready to start her Pace career. What drew her to Pace was the fact that there are so many activities that students are passionate about. “Everything seems like a priority,” she said.

Mrs. Maravalli-Neiley is looking forward to the soccer season when she will be one of the assistant coaches of the girls varsity team. “I can’t wait to meet some of the other female students who are in other classes,” she said. She is also “looking forward to getting to know the school more, including faculty in other departments.”

The debate team has a brand new coach, Abby Schirmer, Director of Speech and Debate. She has plenty of experience as the head policy debate coach at the Marist School and years of teaching 7-week summer debate camps. She also debated in high school and college. At Michigan State, she earned a bachelor’s degree in international relations. Debate has been a part of her life for 12 years.

Ms. Schirmer has a unique way of teaching debate; she strives to replace lectures with stories. “I am a storyteller and I really like telling stories,” she said. “Teaching really gives me that platform.” She feels that “a lot of young people do not know how to advocate for themselves,” and through teaching debate she hopes to give students a voice.

This year most of her debate team is “new and fresh,” according Ms. Schirmer. She is not fazed by only having a few returning members and feels this is a great opportunity for her first year. She said that she is prepared to build this new team with “good critical thinking skills, good research skills and good advocacy skills.”

Outside of debate, Ms. Schirmer collects pottery and visits her family in St. Louis as much as she can. She especially loves playing with her three nephews.

The Academic Resource Center (ARC) team added Jordan Silverboard, who serves as an academic coach. As academic coach, she works directly with students to achieve academic success. Before joining the ARC team, she served in a similar role as director of student services at Atlanta Classical Academy and as a transition specialist for high school students with special needs.

Unlike other new teachers, Mrs. Silverboard is an Atlanta native who went to Westminster. Although she attended Pace’s rival school, she says that she “has no hard feelings against Pace and loves it here.” After high school, Mrs. Silverboard earned a bachelor’s degree in English and international studies from Northwestern University. She later attended Georgia Southern University, where she earned a Master of Arts in teaching with a concentration in special education.

Mrs. Silverboard says that her time after college in the Peace Corps “got [her] thinking about teaching.” She worked in the Peace Corps in Ecuador which allowed her to work with youth and families on urban garden projects, academic clubs and more. While deciding where to work after her time in Ecuador, it was “the feeling of family and community” that drew her to Pace.

Outside of the classroom, Mrs. Silverboard enjoys reading. “I was so excited that ‘Harry Potter’ was one of the summer reading books,” she said. This year she looks forward to “getting to know a lot of the students and faculty better” and to attend the Pace tradition, Phlotilla.

While chemistry teacher Dr. Melody Walter is on maternity leave, long-term substitute science teacher Mary Thielman is teaching her honors chemistry classes. Ms. Thielman is a retired educator after 37 years of teaching and being an Assistant Principal in the Cobb County School District. She earned her bachelor’s degree from Briar Cliff University and her M.Ed. and Ed.S. at Georgia State University.

Ms. Thielman first moved to Atlanta in 1982 from Iowa and learned about Pace while teaching at Lovett in the mid 1980s. She enjoys “Pace’s unique approach to teaching the whole child.” Her teaching style mirrors Pace’s approach as she “want[s] students to stretch their talents and abilities while learning new information.” “I want them to experience the joy found in exploring their potential,” she said.

Even though she will only teach at Pace until November, she looks forward to “meeting new people and sharing in the Pace experience.” Outside of the classroom, her life is filled with photography and gardening.

Joining art teachers Donice Bloodworth and Mark Knott in the Fine Arts Center is photography teacher Jennifer Wilson. Mrs. Wilson moved to Atlanta three years ago from New York, where she was teaching art at Collegiate School in New York City, as well as serving as the chair of the visual arts department and as an 11th grade dean. She earned a Bachelor of Fine Arts in two-dimensional studies from Bowling Green State University, a bachelor’s degree in photography from the Corcoran College of Art and Design and a master’s from the University of Delaware.

For as long as she can remember, Mrs. Wilson has always wanted to either teach or be an artist. She enjoyed drawing and painting while growing up, but something about teaching really appealed to her. “I knew I wanted to teach, and I think part of that was because I always felt like my teachers helped change my life,” said Mrs. Wilson. “I think somewhere I felt like that would be exciting to maybe be that person for someone [else].” After taking a photography class in college, Mrs. Wilson fell in love with photography and realized she needed to find a job where she could combine her two passions.

After moving to Atlanta, Mrs. Wilson heard about Pace from a former colleague from Collegiate School who knew Head of School Fred Assaf. She taught at Pace last year as a middle school science teacher and Wilson was quickly surprised by the students and their eagerness to learn. “One of the things that struck me very early on working here was how motivated the students were and how interested they are in learning new things,” she said.

Outside of the classroom, Mrs. Wilson enjoys yoga, travel, food and backpack-style camping. Though Mrs. Wilson taught last year at Pace, she is excited to work in a new environment in the element that she loves. “[I am] looking forward to introducing students to photography and the dark room in a way they have never experienced before,” she said.

Also new to the Upper School this year are Associate Director of the Isdell Center for Global Leadership Ted Ward and Library Assistant Tiger Brown. To learn more about them, check out the articles “Ted Ward Brings Big Ideas, Energy to His New Role” and “Tiger Brown Returns to Pace Academy.”