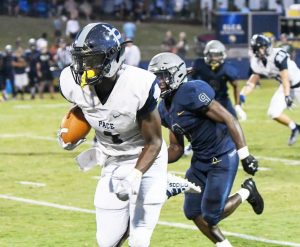 The Knights are 2-1 so far this season, and the team is looking to take each game one at a time and improve week by week, according to the coaching staff. “The region consists of all the teams playing for second place behind [2018 state champions] Cedar Grove,” said head coach Chris Slade. “Hopefully we will be a top four team in the region and go to the playoffs.” The coaching staff’s ultimate goal every year is to make the playoffs regardless of the seeding, but they do not want to look that far into the future.

To kick off the season, the team traveled to Douglasville and played New Manchester High School. In a tight game, the Knights came out on top with a 7-6 victory. Then, over Labor Day weekend, Eagle’s Landing Christian Academy, former 1A state champions, bested the Knights with a commanding 49-0 win. ELCA was primed for the rematch after Pace snapped their 37-game winning streak a year ago in a come-from-behind, 17-16 victory that stunned the Chargers and their fans.

After the loss to ELCA, Pace came back the following week, defeating Monroe Area High School 25-0. The win was a confidence booster for the Knights, as they bested the team that stopped their playoff run a year ago.

Last fall, the Pace football team won six out of its 10 regular season games, with the loss against Monroe Area High School in the first playoff round. The season was led by seniors, including quarterback Jared Rayman, running back Keashawn Perryman and defensive end Sam Assaf along with many others.

“The group was the last remaining group in the state championship,” said coach Kevin Johnson. “So when you have guys that are used to winning, of course the team will miss them.” With that said, the big holes in the lineup allow for new players to show their worth.

Although the team faces challenges given their loss of key players to graduation, they have brought in many new players that have already proved their talent. Junior Evan Smith-Rooks and sophomore Quantaves Gaskins have been battling for the starting quarterback job. Both are showing great skill and potential.

Many new freshmen with impressive resumés also join the Knights this season. Linemen Quincy Downing and Trovon Baugh fill holes left by former Knights Cameron Hamilton ’19 and Chilton Tolliver ’19. Other freshmen such as Jordan Sloan and Frank Caldwell III look to put up big numbers this year as well. Thus far in the season Caldwell has already run in two touchdowns.

The team still has many returning juniors and seniors that are ready to lead and perform. “We are hoping to get some leadership from the seniors,” said Coach Johnson. “That’s what we want the most.” Seniors and captains Jimbo Smith, Sam Harris and Mbiti Williams are already displaying their leadership on and off the field. According to Williams, the captains have a tough job because they have to focus on the entirety of the team, not just individual goals. “The captains are very supportive,” said sophomore Nile Bennett. “We would not be the team we are now without them.”

The team not only has leaders returning, but also state-wide standouts. Junior Jayden Thomas along with Williams were selected to the Atlanta Journal Constitution’s Preseason All-State team. Other notable players to watch in big games are seniors Chris Morocco and Evan Duncan, junior Justin Johnson and sophomore Deuce Jordan.

The upperclassmen have a great bond that is trickling down to the rest of the team. “The team chemistry this year is as good as I have seen it since I have been head coach,” said Coach Slade. “The guys really care about winning over individual accolades and individual goals. A group of 45 boys with a common goal are going to be hard to take down.”

The team believes they are heading in the right direction. The atmosphere on the field and in the locker room is something past Pace football teams have not obtained. “As the Falcons would say, we truly are a brotherhood,” said junior Pearson Bates.

The Knights were up against Charlotte Christian at home on Sept. 13, but the game was cancelled due to a strong band of thunderstorms that moved through the area, producing lighting. After a bye week, the Knights play a region game against Redan High School at Avondale Stadium on Sep. 27. This game will begin the Knights region games and push for the state playoffs.