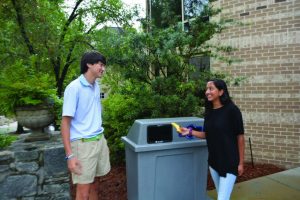 Since the Isdell Center for Global Leadership (ICGL) Scholars program began in 2014, four upper school students have been selected each year to explore different themes related to climate change, a problem that will undoubtedly shape our future. This year, juniors Tommy Assaf and Jack Brown along with seniors Sophie Lettes and Rekha Sashti are embarking on a journey to study one of the most misunderstood aspects of climate change: waste.

This year is particularly important for the program because it is intended to be a review of all that the community has learned with past themes. “The theme is a culmination of the previous five years in that all of them – water, food, climate, conservation, energy – have to do with waste,” said ICGL Program Director Trish Anderson. “As we look forward to the next couple of themes, we’re going to be taking a turn, so we wanted a year to wrap up and talk through and review as a community what we’ve learned through the lens of waste before we move out into slightly different topics like global health, education, etc., that aren’t so strictly scientific in nature.”

The students will address all types of waste. “We’re focusing a lot on what I would say people would refer to as unconventional waste sources,” said Sashti. “Literally everything we interact with every day produces waste and pollutes the earth.” While people often think of waste as the things that they usually put in the trash, the scholars will try to raise awareness of the types of waste that people do not think of.

“We’re going to be thinking about tech waste, food waste, power waste and more,” said Assaf. “Personally, I’m really interested in tech waste. Just think of all the waste created by phones and TVs and laptops when people just throw away their older models instead of reusing them. Most people don’t think about that when they’re upgrading their phones every time a new one comes out.”

To prepare for a year of learning and educating the Pace community, the four scholars read the book “Cradle to Cradle” by Michael Brungaurt. The book discusses how the “reduce, reuse, recycle” motto that has been used in environmental rhetoric has created a misunderstanding about waste in our society.

“There are a lot of misconceptions in environmental rhetoric,” said Sashti. “Like, when someone says that something is recyclable, or reusable, or helping the earth, that doesn’t actually mean it is.” “Cradle to Cradle” is considered one of the seminal books on reducing waste and designing products with their environmental impact in mind.

“The products we create are good,” said Ms. Anderson. “They drive the economy. I mean, what would we do without products like the computer? But what the author is trying to say is that the product should be designed from the front end to be broken down easily into recyclable parts. Instead of thinking about how to recycle things once we’ve used them, we should design them with recycling in mind, keeping in mind that some things have more value as recycled materials than others.”

In addition to their summer reading and group discussions, the scholars will be supplementing their learning through travel. For their first trip they will be going to the Bay Area of California over the October break, visiting sustainable companies and talking with experts. However, the trip comes with a twist: the students and their chaperones will try to live a zero-waste lifestyle during the duration of the trip.

“It’s definitely going to be challenging, but I think it’s doable,” said Lettes. “We don’t know how we’re going to accomplish it yet, but hopefully as we learn more about how to reduce waste, we’ll come up with a plan.”

This year is also different from other years because the ICGL Program has welcomed a new associate director, Ted Ward, who hopes to combine his background in social justice with the Program’s environmental themes. “I knew about the ICGL program before I started here, because it’s well-established and well-regarded in the Atlanta community,” said Mr. Ward. “So I was really energized to come into something that was already well down the road and further its reach into the Pace community.”

This challenge will also give the scholars what they hope will be some ideas to reduce waste that they can bring to Pace. “We want to make Pace less wasteful, whether that’s through education or steps to reduce our waste,” said Mr. Assaf. Mr. Ward agreed that one of the program’s ultimate goals is to create change in the Pace community. “While we look at it nationally and globally, I think we need to really reflect on how we deal with waste here at Pace, and how we can change our community’s consciousness.”

Despite the different aspects of waste that each of the four scholars are interested in, they are all united by one common sentiment: a conviction that what they learn this year is an essential part of the climate change debate. “It’s really unfortunate that waste is often left out of the conversation,” said Sashti. “At the rate that we’re growing as a population, I think waste will ultimately be our demise if we don’t start focusing on creating change from an individual perspective.”