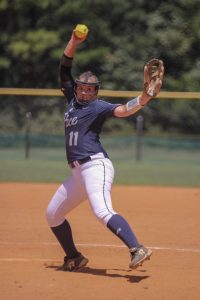 Starting a new season is full of non-stop work and strenuous competition, especially when the team is full of new players. Now the varsity softball team is wrapping up their regular season, with a focus this year on incorporating six freshman girls into the chemistry of the team. Although this task can be difficult, the girls have proven that the new players have created a strong dynamic.

With a record of 8-13 on Sept. 26, the softball team has been challenged by significantly larger schools outside the immediate area such as Newnan High and Carrollton High. However, they did defeat other powerhouses, like Lambert High, a 7A team with 3000 students, and Westminster (twice). “We have a lot of potential this year,” said sophomore Marissa Goodman.

Their season began in the early summer with optional practices twice a week and weight room workouts. “A majority of the girls played on travel ball teams over the summer, too, which helped them to prepare for the season,” said head coach Jewell Marable.

After losing Caelen Corbally ’19, who was a vital member of last year’s team, the girls needed a new approach for this year. “I think this year is different because we actually have a full team,” said junior Sydney Silverstein, a pitcher for the Knights. “The freshmen have helped a lot. We have an outfield this year that we can rely on, knowing the ball is going to get caught out there. They will dive after anything and go for it.”

Making up almost half of the roster, the freshmen have had to take on a role that most teams do not expect freshmen to assume. “We would not have a team if it wasn’t for our freshmen,” said Coach Marable. “The new blood has helped us in ways we didn’t expect,” said Goodman.

Also, the two senior leaders have contributed greatly, making sure the girls know what is expected of them. As team captains, seniors Molly Buffenbarger and Caroline Landis have looked out for the younger freshmen. “They also communicate with our coaches and represent our needs, which has been really important this year,” said junior Helena Harris. “The seniors hype us up before games too.”

Not only have the freshmen and seniors brought skills and knowledge to the team, but they have helped to create an even deeper bond among everyone. “We are really close this year,” said Buffenbarger. “That’s the one thing that is different about softball. Because it is such a small team, everyone gets to be really good friends. Our team is really special because you could go up to anyone and be comfortable with them.”

The team has learned to translate their chemistry positively on the field and have learned how to work with one another. “Our team bond has helped us get through the tough games, and even through losses, we still stay connected and cheer each other on,” said Silverstein.

With Silverstein’s consistent pitching, Landis’s hitting and freshman Sara Mazur’s fielding, the team is primed for the competition before them. This season has been laborious and tough, but the genuine love for softball that each girl has shown unites all of the players. “I know that this year has been different as everything feels so new, but everyone really cares about softball and being there for each other,” said Buffenbarger. “We have formed new traditions this year and have pushed ourselves to new heights.”