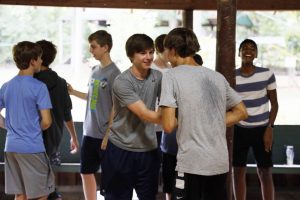 Feeling anxious but excited, the Class of 2023 departed for Camp Skyline in Mentone, Alabama on Saturday, Aug. 10 and began high school a few days early. Forty new freshmen joined Pace Academy this year, and they were more than ready to bond with the returning students. “I was really excited to meet everyone on the retreat,” said new freshman Maddie Swartz.

Surrounded by the senior peer leaders and Pace faculty chaperones, freshmen engaged in a variety of team-building activities and icebreakers to facilitate a welcoming environment for all. The Skyline staff of outdoor educators led the students in activities like canoeing, rock-climbing and conquering a high ropes course. Students ate meals together in the dining hall and slept in cabins during their two-night stay.

The purpose of the annual retreat is to create a smooth transition for freshmen from middle school to high school. The 18 senior peer leaders who accompanied the freshmen on the retreat helped make this possible. “The retreat is really helpful because the kids go into high school with someone to lean on, whether that is someone in their grade or a peer leader,” said peer leader Payton Payne.

The peer leaders encouraged the students to go outside of their comfort zones and also purposely mixed up friend groups so freshmen could get to know people that they might not otherwise spend time with. “I was actually really nervous about meeting new people, but it turned out really well because there wasn’t as much tension as I thought there would be,” said returning freshman Will Hankins. “The peer leaders definitely helped relieve that tension.”

Freshman dean Allison Tarvin also reflected on the change in the grade dynamic from the beginning of the retreat to the end. “At first it felt very divided, but it was amazing how fast that dynamic disappeared and how fast the new kids were integrated into the grade,” she said.

The retreat helped foster new relationships between freshmen as they attempted activities that they had not tried before. “When we would do certain activities, some people were really nervous and everyone would cheer them on, which definitely helped with bonding,” said Payne.

One of these activities was the Panther Pole, a 40-foot-tall telephone pole that students climbed up and jumped off while trying to grab onto a bar in front of them. “I really liked the Panther Pole,” said returning freshman Adam Schultz. “It seems scary when you’re looking up at it, but once you are up there it’s no big deal.” The Panther Pole was one of many activities that pushed students to expand their horizons. Returning freshman James Romig considered the Panther Pole his favorite activity of the retreat.  “My favorite activity was probably the zipline,” said new freshman Graves Hamilton. “I was scared at first, but it ended up being a lot of fun.”

Mrs. Tarvin witnessed the grade dynamic throughout the retreat. “They are really energetic and enthusiastic,” she said. “[They’re] the spontaneous dance party kind of group.” She has high hopes for the Class of 2023 in the upcoming years and she loved the energy that they brought to the retreat.