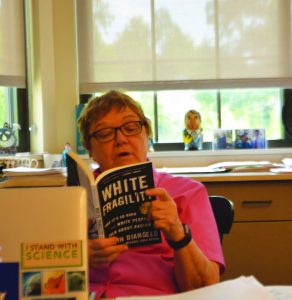 What do teachers do over summer break? As one might expect, many of them spend their time reading, not only for school, but also for fun, with books provided by the Pace Parents Club. “The faculty summer reading program has been going on for many years, with the Parents Club generously funding it,” said Director of Libraries Matt Ball, who coordinates the program. The 10 selections for this year included nonfiction books that touched on education, history, science and diversity, as well as some fiction.

“Although I make the final selection of what books are offered, I rely heavily on input from several colleagues, including Ms. Wilson, Ms. Brown, Mr. Hamburger and Dr. Carter,” said Mr. Ball. “The goal is to find books that will appeal to everyone at Pace. All faculty and staff are invited to request a book.” This year’s books brought new ideas with a unique spin, but also examined important issues such as deforestation, women’s empowerment and race.

“The Overstory” by National Book Award winner Richard Powers digs its roots into the ever-expanding climate crisis that’s hot on our heels. The novel covers the story of nine main characters, each profoundly changed by an experience with trees. Their lives seem at first to be detached from one another, but underneath they are all deeply intertwined.

Five of them assemble to protect one of the last virgin forests, and in the process, they become “eco-terrorists,” committing arson and sabotage, and creating human barricades. But events soon take a dark turn. “You wind up getting invested in the relationships between the people and the trees, and you end up rooting for this gang of eco-terrorists,” said English teacher Emily Washburn. “A line blurs over what you are trying to save and when you can become an agent of terror.”

Some of the most compelling and beautiful characters in the novel are 200 feet tall, making it clear that there is an obligation to reverse the destruction, or, as with Mrs. Washburn, have more sympathy for people trying to help the environmental effort. “It made me wonder about what is our duty to the world,” she said. Although a lengthy read, the novel is more relevant than ever, and causes one to think deeper about the effects of environmental destruction.

Director of Diversity and Inclusion Joanne Brown and history teacher Helen Smith, along with almost 100 Pace faculty members, read the New York Times bestseller “White Fragility” by Robin DiAngelo. “White Fragility” seeks to explain why white people are uncomfortable, even angry, when talking about racism. DiAngelo explains that white people live in varying degrees of an environment that protects them from race-based stress, which lowers the ability to tolerate racial stress. This results into what she coins “white fragility,” where racial stress provokes defensiveness in white people.

Ms. Smith recognizes that this book will be difficult for many white people to read. She explains that it will make them focus on what they already know, that they are privileged. One of the most eye-opening ideas in the book is that white people don’t think of themselves as a race; they think of themselves as “normal.” This idea is even ingrained in law, institutionalized, which was the most crucial point to Ms. Smith.

“I think I will use it specifically in teaching because it will make me much more aware of the legal framework that has made this country white privileged,” she said. “It’s not just informal but also in law. We need to be aware of what the laws do to people, because of the image that one has if one is defined differently by the law.”

It also brought a new level of awareness to herself. “It made me realize how different my childhood and my whole life has been because I can walk into any place and not think that people are looking at me because of my race,” she said. “The laws I’m assuming will be enforced fairly for me. I didn’t have to worry about being shot in a gas station parking lot because the music was too loud,” she said. “We do not know how privileged we are to be white, and I think “White Fragility” really helped me see that.”

As a person of color, Mrs. Brown was intrigued to hear the perspective of Robin DiAngelo, a white woman, as it would be from a completely different mindset than a person of color who is doing similar work. “Learning new perspectives brings awareness to your own identity and helps with fostering that sense of belonging and inclusion around people that might be different than you,” she said. “As a black woman, I’m constantly sharing my own personal stories with people as an attempt to bring empathy and knowledge to other people who may not know what it’s like. It’s refreshing for me to read an author who is a white woman who acknowledges why it was so hard for her to talk about racism and her cry to people like her to say that, yes, it is going to be uncomfortable.”

Math teacher Kimberly Goodstadt dove deep into World War II-era France with the novel, “The Lost Girls of Paris” by Pam Jenoff. The book is about Grace Healey, a woman who lost her husband in the war and finds a suitcase full of photographs of different women in Grand Central Terminal. She later discovers they are photos of spies sent from England to help with the war effort.

“Being a female, it was really amazing reading a story about women taking charge and about women’s roles in the war,” said Ms. Goodstadt. “Although it was still fiction it was based off of facts, so to know that something similar actually did happen, I thought was really inspiring.” This book is combines fiction with real-life events, providing the true story of female British spies during World War II as well as the fictional story of Grace Healey.

“How to Hide an Empire” by Daniel Immerwahr reveals the harsh truth that some Americans are afraid to accept: America is an empire. Read by Dr. Christine Carter, U.S. history teacher, this book exposes the imperialism, colonization and domination of other cultures that have characterized America since the 19th century. Immerwahr shines a light on the American territories and islands that he says have been cast aside and ignored by America and its citizens, as well as how the citizens of these territories are looked upon as “others.”

Even though Immerwahr begins the story of American imperialism in 1898, Dr. Carter believes the book is still incredibly relevant in the present. “He pays a lot of attention to the importance of race in building an empire and how it was used in justifying building an empire and obviously that is still very true today,” she said. “Plus, he also goes up to 9/11 and Afghanistan which is still in the news right now.”

Dr. Carter can see the effects of this imperialism and racism discussed by Immerwahr in recent times. “I kept thinking about this with the hurricane in Puerto Rico and how a lot of Americans were treating Puerto Rico as though it wasn’t even part of the United States,” she said. “Puerto Rico is still really struggling and I think sometimes Americans justify that to themselves because they think of Puerto Rico as ‘other.’ They see those people as looking different from white Americans.”

The book provides a deep insight into the dark side of American history, making it perfect for someone who wants to deepen their understanding of history or, as Dr. Carter puts it, “someone who is interested in American history but through the lens of our role in the world outside America.”

Dr. Carter also read the powerful novel, “The Other Americans” by Pulitzer Prize finalist Laila Lalami. It follows the story of a Moroccan immigrant who was murdered and his family, as well as an Iraq war veteran, a detective, and an undocumented immigrant, each deeply divided by race, religion and class. Lalami even portrays a white family feeling threatened by the influx of immigrants.

“l think the things that she does well is how she portrayed a white family that had been in the community for a long time and their sense of being threatened and fearful,” said Dr. Carter. “It would be very easy for her to make them the villains but she kind of deals with them in a very nuanced way… you still feel a little sympathy for their situation.” The novel is a love story and a mystery. However, it also brings to light a deep examination of life as an immigrant. Dr. Carter believes that if one is open to reading a novel, and opens themselves to new perspectives, it may change the way they think about the world.

“Falter” by Bill McKibben is a harrowing non-fiction book that issues an urgent warning: climate change is real, and will destroy us. Read by Math Department Chair Gus Whyte, the book not only falls in line with the current ICGL theme of waste, but also with the climate crisis towering over humanity’s heads. McKibben tells the truth with harsh predictions of mass human mortality, although these destructive predictions may expose some problems with the book.

“Books that are nothing but catastrophic predictions are not very helpful,” said Mr. Whyte. “I think to simply say, ‘well we’ve wrecked it, we’re past the point of no return, and given our political situation, it’s not going to get better,’ that’s not very helpful and I think the book leans that way a little too often without offering some real solutions.” McKibben’s grim future for humanity is something many already know, and Mr. Whyte believes that “we can get into this echo chamber idea where we sort of read and listen to things that we already believe without seeing the other side of things.”

“One of the things I always say about reading is that it broadens our perspective and makes us more empathetic people,” said Mr. Ball. “Through books we can see heroes in all kinds of people that maybe we’d never seen before.”