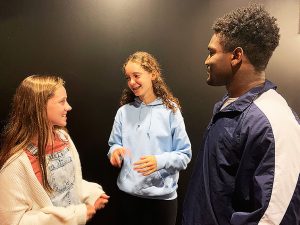 There is a lot to be excited about this school year, including the shows that the theatre department has in store. This year’s productions are Qui Nguyen’s “She Kills Monsters,” Meredith Wilson’s hit Broadway musical and five-time Tony Award winner “The Music Man” and the annual Winter Showcase. When asked which of these performances he is most looking forward to, Visual and Performing Arts Department Chair Sean Bryan said, “It’s almost like asking, ‘What’s your favorite dish at Thanksgiving?’ Well, I like multiple dishes.”

The year will kick off on Oct. 22-23 with “She Kills Monsters,” a drama-comedy set in the world of “Dungeons and Dragons.” The role of protagonist Agnes Evans will be played by junior Audrey Holton. Agnes is mourning the death of her late sister Tilly (played by senior Lauren O’Sullivan) when she stumbles upon Tilly’s notebook which reveals that she had been well-known in the online gaming community. Junior Jack Brown will be playing Evil Gabbi who is Tilly’s bully and a monster within the game. “I’m looking forward to continuing to work on character development, as this character was originally female and I’m looking forward to playing it femininely,” said Jack.

“She Kills Monsters” will serve as Pace Academy’s entrant into the Georgia High School Association’s One Act Play Competition. Mr. Bryan is eager to show off the fight choreography and unique props that will be used for the show, set in the mid ‘90s.

The annual Winter Showcase will take place on Jan. 24-25. For this unique production, the audience moves around the Pace campus to see the actors as they act out scenes in different locations in the FAC and the Upper School. The students look forward to this opportunity to write and direct their own material. The theatre department will once again collaborate with the Serenbe Playhouse for this show.

Both the students and Mr. Bryan are most excited for the spring musical slated for April 3-4. “The Music Man” first became a hit on Broadway in the late 1950s and since then it has been made into both a TV show and movie. It tells the story of con man Harold Hill who poses as a boys’ band organizer. The plot takes a huge turn when he falls in love with Marian, the librarian and piano teacher, and risks being outed to be with her. “The music is so wonderful… it is just a great, simple story that asks a lot of great questions,” said Mr. Bryan. “It’s a classic musical, but I think it’s still powerful today.” Sophomore Shalizeh Thobani said she hopes to improve her singing, dancing and acting while working on “The Music Man.”

A common theme among students who participate in theatre is their love for creating bonds with other actors throughout the year. Rather than looking forward to a specific show or developing a certain skill, junior Elliot Mathis is most looking forward to “expanding her friend group” and meeting new people with whom she has not had the chance to interact. Similarly, O’Sullivan is excited to meet students in other grades during rehearsals this year.

Aside from the intimacy that comes with working alongside other students, Pace actors and actresses also appreciate the theatrical skills and knowledge that Mr. Bryan has to share. “He is really great at casting,” said O’Sullivan. “He’ll pick a show and you don’t expect it to work out, but then he casts it so well and you can see his vision. You can also see how genuinely excited he is about theatre… so it’s nice to be a part of his process.”

This love for working with one another goes both ways. Mr Bryan described the Pace students as “kind, great kids with great hearts and intentions who apply themselves.” He is struck by their “empathy and willingness to step into other people’s shoes.”