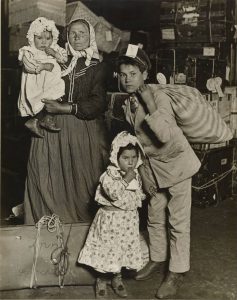 A family arrives on Ellis Island in 1904. Photo: wikimedia.org

Immigration policy has been a hot topic in 2019, and it doesn’t seem like it’s going to cool down any time soon. Immigration and Customs Enforcement (ICE) has been very publicly active over the summer, resulting in protests and an outcry on various social media sites.

The most recent large raid was Aug. 7, when 600 ICE agents visited workplaces across Mississippi, arresting 680 people who were suspected to be working without legal documentation. This left children hanging in limbo and turned many adults into sudden babysitters. “Please show some heart, let my parent be free with everybody else, please…” Magdalena Gomez Gregorio, an 11-year-old whose father was taken away in the raid sobbed on camera, pleading with the government. “My dad didn’t do nothing. He’s not a criminal.”

There has also been anger at the fact that as of now, none of the business owners have been charged with hiring someone illegally. This can be attributed to Trump’s classism and xenophobia; rather than attacking the people who are truly to blame, he has found it fit to arrest those who are just trying to provide for their families, leaving said families destabilized and broken without them.

Even worse, last December, The New York Times revealed that Trump had undocumented workers employed on his golf course. It’s clear that he only cares about workers being undocumented when it doesn’t benefit him.

The human rights vs. lawfulness debate has split the country, even resulting in violence. On Aug. 14, one such incident involved ICE protestors who were sitting in front of the entrance to a detention center’s parking lot. A guard driving up, seemingly consumed with anger at people using their right to assemble, accelerated and tried to hit the protestors (who thankfully got out of the way).

America, a country that claims to be the “land of the free” has – and let’s call it what it is – kidnapped so many people out of some misguided idea of justice. This country was once admired for its welcome of immigrants through Ellis Island, both those seeking asylum and economic prosperity. Seeking asylum is not a crime, and yet we seem to be treating it as such. People who cross the border are immediately intercepted and put into crowded concentration camps, places rife with sickness and filth. They’re held there for months on end, and any question about how long they’re going to be held is left unanswered. During Trump’s administration, 24 detainees have died in ICE custody.

Though in most other countries this would be cause for extreme alarm and distrust towards the concentration camps at the border and the detention centers scattered throughout the U.S., Trump has still managed to retain his cult following despite the human rights abuses he’s caused. He has heartlessly ignored the detainees’ (human beings) pleading for help and mercy.

“I started taking care of [name redacted, age five] in the Ice Box after they separated her from her father,” one 15-year-old girl said when interviewed about the conditions inside one of the Texas detention centers. “I did not know either of them before that. She was very upset. The workers did nothing to try to comfort her. I tried to comfort her and she has been with me ever since. [Redacted] sleeps on a mat with me on the concrete floor. We spend all day every day in that room. There are no activities, only crying.”

The Ice Box that she mentions is one of the holding cells, named that way for its frigid temperature. Women and children are held in these freezing rooms for days at a time. After just five days there, a 5-month-old girl was hospitalized with pneumonia. These temperatures are just barely survivable without severe repercussions. Some women reported their lips chapping and splitting and children’s lips, fingers and toes turning blue.

Trump has yet to truly investigate or regulate these conditions, and so the ICE agents are allowed to be as sadistic as they like. Detainees reported being too scared to ask for food for fear of repercussions, and agents mocking them and spitting at them. On June 22, Japanese internment camp survivors marched in protest of ICE outside of Fort Sill, a former internment camp that will likely soon be used as a detention center.

If you’re still struggling to see the parallels between this situation and atrocities in the past, maybe this quote will clear it up for you. “Terrible things are happening outside… poor helpless people are being dragged out of their homes. Families are torn apart; men, women and children are separated. Children come home from school to find that their parents have disappeared.”

This describes the current situation for immigrants across America so well, you might think that it was written just yesterday, maybe a quote from one of the immigrants kidnapped in the workplace raid. It almost perfectly describes this summer for immigrants who crossed the border seeking asylum.

There are things that each individual can do to help those being held captive. Protests are held often (in fact, there was one this summer in Atlanta), and you could even lead your own. There are multiple organizations, such as the ACLU’s Immigrants’ Rights Project, that are shipping necessary items to the camps that the children there need (but are not receiving). This organization has dedicated itself to protecting immigrants’ rights and has been at the forefront of almost every major struggle involving them. Right now it is challenging laws that deny immigrants access to the courts, impose definite and mandatory detention and discriminate on the basis of nationality.