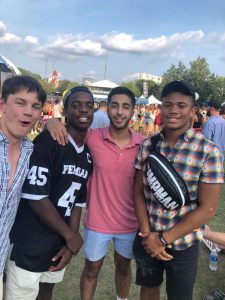 Although the scorching Atlanta heat was blazing on Sept. 13 and 14, Piedmont Park still attracted over 200,000 attendees for its annual Music Midtown festival. Amidst a weekend of over 30 acts representing many genres, there were obvious standouts that enticed the crowd.

Atlanta natives Lil Yachty and 6LACK (pronounced “black”), pop singer Madison Beer and pop rock band Panic at the Disco were certainly fan favorites. However, it was the most hype artist of all time, Travis Scott, that made the festival worth its expensive ticket price.

For fans not drawn to large mosh pits and raves, Music Midtown welcomed artists Quinn XCII and Charlie Puth to energize the audience in a mellower manner. XCII had the crowd swaying back and fourth peacefully with hit songs “Stacy” and “Flare Guns.” Puth performed directly after XCII and packed the Salesforce Stage area. Hearing suspicions that Selena Gomez would make a guest appearance, the crowd was upset when she never came out. Nevertheless, Puth sang his hit song “We Don’t Talk Anymore” with the crowd harmonizing along with his melodic voice.

Will Smith’s son Jaden Smith showcased his young talent, appearing in his first ever Atlanta concert, and he certainly did not disappoint. At only 21 years old, Smith performed for what seemed to be the entire city of Atlanta, rolling out popular songs, “Ghost” and “SOHO.” Many new fans were unaware of the hidden talent Smith possesses, but his amazing set won the hearts of these new fans.

Perhaps the most attended show of Saturday night was rainbow-haired rapper Lil Yachty. He performed “Yacht Club” from his recent album “Nuthin 2 Prove” and one of his first songs, “One Night,” which spurred the audience into a jumping and yelling contest for the entire show. “I have never sweated that much in my life,” said senior Sam Adams, a loyal Yachty fan. “It was so sick, like 100,000 people in a small place going insane. I swear my voice was completely gone after.”

Sunday night headlined trending artist Billie Eilish, Atlanta’s very own 6LACK, and phenomenon Travis Scott, easily overshadowing Saturday’s shows. 6LACK combined his hip hop beats with his mellow tone in songs “Pretty Little Fears” and “Let Her Go.” Many fans were unaware of the versatile talent he owns but soon after began adding his songs to their Spotify playlists.

Following the Atlanta native came the long anticipated Houston legend, Travis Scott, also known as Cactus Jack or La Flame. Scott debuted his song “Highest in the Room” while also performing throwbacks like “Mamacita.” His “Astroworld” tunes, however, are what electrified the crowd. As the beat to “Stargazing” began, the stage lit up, and the audience jumped their way into a 100,000 person mosh pit filled with pushing, shoving and cheering.

Many guesses were taken on who Travis would bring out for guest appearances and the answers were breathtaking. Rapper Playboi Carti, as well as Offset from the trio band Migos appeared on the stage, exhilarating fans. “This is why Travis is the best live performer of all time,” said junior Josh Mininberg.