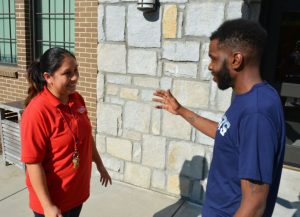 (L-R) Norma Rodriguez and Terry Johnson take a break from their busy schedules to talk to the Knightly News about the middle schooler they helped get to school. Photo: Mary Childs Hall

Most independent school students have arrived to school by 8 a.m. each morning, preparing for their first bell to ring. But on the morning of Aug. 16, a young sixth grade Holy Innocents’ Episcopal School student was having trouble finding her way to school.

After missing her bus, the 11-year-old girl was unsure of what to do. Lacking a phone or any way to contact her family, she stood on Northside Parkway alone and worried. However, she soon found refuge through the help of maintenance and grounds staff member Terry Johnson and cleaning staff member Norma Rodriguez.

Many Pace staff members park at St. Anne’s Episcopal Church due to a shortage of parking spots on campus. Every morning is a similar routine, as they are picked up by Mr. Johnson and driven to Pace. However on this day, there was something different: a young girl was sitting alone on the pavement outside of the church.

“When I got to the church for pick up, I saw a little girl sitting on the ground by herself,” said Mr. Johnson. “She looked kind of confused.” He then asked Mrs. Rodriguez to find out who the girl was and if she needed any help. It turned out the girl, who was a new student at Holy Innocents’, was lost, having no way to get to school. Mrs. Rodriguez allowed the girl to use her phone to try and contact her parents. “The girl tried calling her dad, but he wasn’t answering,” said Mrs. Rodriguez. “We tried calling over and over again, but there was never any pick-up.”

After some time, Mr. Johnson called both Pace and Holy Innocents’ to ask what they should do. When he got in contact with Holy Innocents’, they said they were unable to send another bus. “I knew that we couldn’t leave the girl there because there was nobody,” said Mrs. Rodriguez. “She was nervous and shaking, but I told her not to worry because we wouldn’t leave her alone.”

Both Mr. Johnson and Mrs. Rodriguez knew that they needed to help the girl, and the thought of leaving her never crossed their minds. “We live in a crazy world, and people think that Buckhead is easy,” said Mr. Johnson. “But some people know that there are still dangers here, so I knew we should do something. I mean, we are all on the same team.”

Eventually, with the help of Pace security manager Kevin Johnson, the two took the initiative to drive the young girl to her school. “My heart was booming when we took her to Holy Innocents’,” said Mrs. Rodriguez. “She was so grateful. She said thank you so much.” The girl hopped from the bus and walked into school, now ready for her day.

Without the help of the Pace community members, this girl would have been hard pressed to get to safety, while her classmates and teachers continued on with their day, not even realizing what was happening across town at St. Anne’s. “I have two daughters and I was thinking if something were to happen with them,” said Mrs. Rodriguez. “I just hope that one day if my daughters ever need it, someone will help them.” This selfless act, which was not done in hopes of recognition, helped this vulnerable girl when she needed it most.