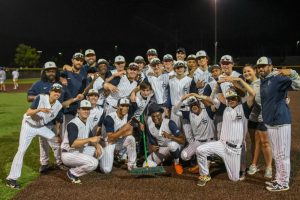 The Knights celebrate after they defeated North Hall 9-1 and 8-4 on May 14 to advance to the state championship. They relied on the entire team to achieve all the things they did, truly making them a family. Photo: Fred Assaf

Long after the game ended, the team remained in the locker room, stunned. Their 21-game win streak had finally come to an end at the hands of Pike County in the state championship on May 21. The Pirates beat the Knights twice in extra innings, 5-4 and 7-4, to win at historic Luther Williams Field in Macon. There was complete silence; no one wanted to speak, and certainly no one could find the words to say.

Finally, Coach Seth LaFera spoke: “I know it hurts and this isn’t how we wanted to finish, but look at how far we’ve come. No one expected us to be here, but here we are.” That may have been an understatement given how much this team accomplished. The Knights were 5-6 to start the year, and finished 28-6 as well as being crowned region champs and state runner-up.

This year’s team had seven out of nine players expected to start with at least one full year of varsity experience. Additionally, seven seniors led the squad, providing experience and leading an otherwise relatively young team. Five of those seniors – Darian Howard, Andrew Jenkins, Mitchell O’Berry, TJ Rafeedie and Brian Zeldin – will go on to play baseball in college.

This year had been marked by coaches and players as “The Year,” because it was seemingly a perfect storm. With the seniors, one of the most talented groups of players in Pace history, the team finally had the experience and skills to make a deep run into the playoffs. “We had high expectations because this was the year where we finally had majority upperclassmen starting, and the players who were dubbed the “keystones” of each class had grown enough to compete,” said team captain O’Berry. The season started with the goal of a state championship, and the team knowing they had the talent to achieve it.

But even before the season started, the team had already felt adversity. Junior Zachary Howard suffered a fractured vertebrae, pulling him from the lineup for two months. After beating Greater Atlanta Christian and St. Pius, the team lost three straight games to Grayson, Allatoona and Houston County. “Those games were demoralizing because we were winning in the last inning of each one and blew them all,” said sophomore Jayden Thomas. “We had a lot of confidence going into the season and we were kind of shell-shocked when we struggled early on.” The Knights went on to win two more games before heading to spring break, which included two losses in Tampa.

Right before the first game in Tampa, the team faced more difficulties: Zeldin pulled his oblique muscle, sidelining him for three weeks. When the boys came back from Florida, they took a much needed break at the beginning of region play: three easy series against Stone Mountain, Towers and Cedar Grove. The Knights swept all of them handily. After rattling off five straight wins, both Howard and Zeldin were cleared to play just in time for the true beginning of the season: three series against Redan, Westminster and Lovett.

In the game against Redan on April 9, the first game all year where all nine starters played, Pace was down four runs in the bottom of the last inning after some questionable calls. However, like the team had done all year, they battled through adversity. All nine players got on base in the seventh inning with freshman Jae Williams hitting a walk off single to defeat the Raiders 9-8. “That game was huge for us because it made us believe in ourselves again,” said team captain Jenkins.

The Knights rolled the next day at Redan, sweeping them in an 11-7 victory. That Friday, in the team’s third game of the week, Pace preserved a 5-4 lead to beat Westminster. “When we preserved the lead in the last inning, that showed how far we had come as a team since the beginning of the year,” said Coach LaFera. “That was the type of game we lost early on, and winning that game showed the maturity and growth of the team.” The Knights beat Westminster 12-2 in their next game, leaving only Lovett standing in the way of the region championship.

The first game against Lovett was an 11 inning grind, with the game being saved by players who weren’t everyday starters. Ultimately, the Knights won 2-1 on a sacrifice fly by Darian Howard. One more win and the region was theirs. In front of many Pace students, the team flashed their talent by manhandling Lovett 12-4 and securing the region championship and an undefeated record in the region. This year’s team was the first to win region since 1996. After overcoming so much adversity, the Knights were aimed and poised to repeat one more achievement of the 1996 team: Win it all.

The playoffs went off without a hitch until the state championship series. The Knights pummeled first round opponents East Jackson 10-0 and 15-2, and carried that momentum into the Sweet 16, where the Knights swept Calhoun 10-1 and 13-0. In the Elite 8, the Knights ran into a little trouble against Crisp County, winning game one of the series by a score of 5-4. However, they got back into a groove in the second game, manhandling the Cougars 14-0. It was much of the same against North Hall, with the Knights prevailing in the first game 9-1, and in the second game 8-4. It was on to the state championship, and the only opponent standing in the way was 32-4 Pike County.

Playing away from home field for the first time in months, the Knights struggled to get things going. Calls did not go their way, the fielding was not perfect, and they never truly showcased the offensive power they have repeatedly demonstrated they possess. As a result, Pike County swept the series.

But Coach LeFera’s words will stick with the players as he summed up the season as a whole. “Everyone, including ourselves, counted us out,” he said. “We lost two key players, we had a losing record and we were in a tailspin. No one thought we could get to this place. But here we are. Out of 100 teams in AAA, we were one of the best two. That’s something to be extremely proud of.”

Through tears, both his and the players, he would go on to add: “This team, this season, was never about winning a championship. That may have been the goal to some, but the goal and the best part of this season was the family that formed between you players, and the memories you made along the way that will always bind you together.”

Coach LaFera finished by saying: “Look at what you did. You brought students, faculty, alumni, and even people not associated with Pace in so they could cheer you on and watch you play. You brought a community together because of how good you guys were, but also because of how much fun it was to watch you guys, who were so obviously a family, play as a team. And that’s something to be proud of. You guys made a school community believe. And that’s all that I could ask for. That’s the greatest accomplishment a team could ever hope to achieve.”