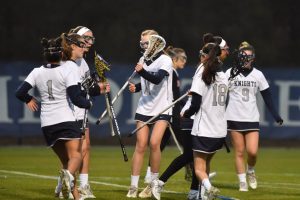 Pace history was made by the girls varsity lacrosse team when they made it to the first round of the state playoffs for the first time in program history this year. In the first round of the GHSA Class A-5A playoffs, the Area 2 No. 4 seeded Knights played Area 3 No. 1 seed Kell High School at Kell on May 1. The girls suffered a devastating loss in that matchup, but were proud overall of their performance this season. “We’ve improved a lot this year and how we ended does not give us justice,” said sophomore Reily Hamilton.

The Pace girls varsity lacrosse team underwent major challenges at the beginning of the 2017-2018 season and faced even more challenges during the 2018-2019 season, with coaches Molly Millard and Sydney Holman moving up to the head coach positions from assistant coach roles they held the previous spring season.

Coach Millard played as a defender for the University of Virginia, and Coach Holman played as an attacker for the University of North Carolina, Chapel Hill, where she won the national championship. “Our coaches are amazing; their coaching style is very chill, but still authoritative,” said junior captain Claire Wierman. “They’re very understanding, but they also expect high standards from us.”

The team was led by four captains: seniors Madeline Arenth, Caelan Corbally and Eden Kerker, along with junior Claire Wierman. Wierman first started lacrosse because a friend invited her to play in fourth grade and join a recreation league team. “I’ve been playing ever since, and started playing club in eighth grade,” said Wierman. Her favorite part of the game is “the speed of it and the strategy of the game,” she said. “It’s awesome [as a defender] to be able to force the offense where I want them to go.”

Off the field, senior Caroline Singleton led as the team’s Stats Manager. “I enjoy stats because it helps the team learn what they can do better and also helps individual players with getting better at very specific things,” she said.

April 25 marked the girls varsity lacrosse last regular season game. They ended the season with a bang, beating Sequoyah High School 13-12 and finishing with a 6-6 record. In this match, the team fought hard and did not give up, even with one less player for the remaining 25 minutes of the game due to fouls. “Throughout challenges, our reliable coaches, strong captains and tough practices made our success possible this season,” said junior Sandy Lum.