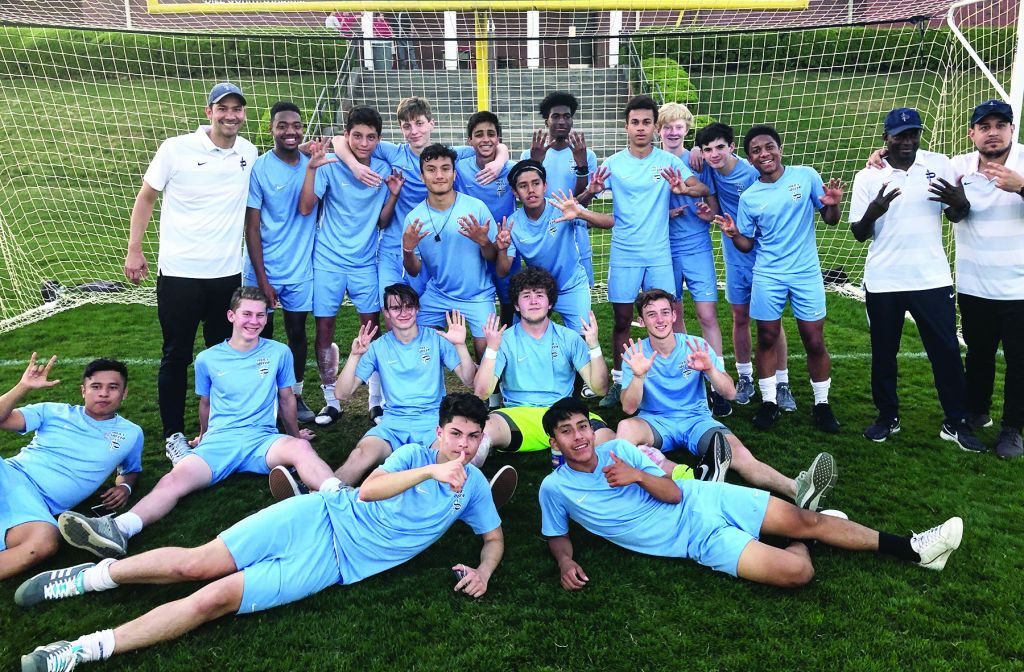 The team celebrates their 8-1 win over Morgan County in the first round of the playoffs on April 24. Photo: Troy Baker

Coming off a disappointing 2017-2018 season, the varsity boys soccer team entered this spring hungry to get back to the playoffs. In order to achieve this goal and to prepare themselves once they got there, Pace competed against arguably the toughest schedule in the state. The Knights opened the season traveling to play at McIntosh and Southeast Whitfield High Schools, two schools whose record is a combined 34-7-1 and who are both currently in the state semifinals of 5A and 4A, respectively.

Then, in mid-February, Pace traveled to Vestavia, Alabama to compete in the Vestavia Invitational Tournament. The team faced fierce competition from top schools in our neighboring state and returned to Atlanta with one win and one loss on the weekend, but more importantly they gained vital experience before region play started. To further that end, the Knights squared off against perennial powerhouse programs including Lakeside, St. Pius, Woodward and Cross Keys and emerged from that gauntlet of opponents with a newfound sense of confidence.

In Region 5 play, Pace opened with comfortable wins over Towers and Redan and then managed to best Stone Mountain in a 4-3 slugfest after falling behind 2-0 in the first half. The grit on display in that game proved to be an early sign of things to come. With the aforementioned region victories, a postseason appearance was assured, but the Knights still had work to do to secure a chance to host a playoff game. That outcome was determined when Pace faced off against Lovett to wrap up region play. After a neck-and-neck 80 minutes, the game was tied 2-2, but the Lions pulled away with a late overtime goal, locking the Knights into the three seed in gutting fashion.

Not deterred by going on the road and being the perceived underdogs, Pace beat first round opponent Morgan County 8-1 in what can only be described as smackdown, sending a message to rest of the remaining 3A playoff teams. Apparently, the Knights’ second round opponent, Greater Atlanta Christian, had their phones on airplane mode because they were clearly taken by surprise with the unity and tenacity Pace demonstrated. In the team’s best performance of the season, Pace took a commanding 3-0 lead and ultimately pulled through 4-2 off a scintillating hat-trick by junior Jesus Pineda, sending the team through to the quarterfinals.

The Knights made the long trek to the coast to challenge Savannah-based Benedictine Military School for a spot in the state semifinals. A rough first half found Benedictine up 1-0 at halftime, and our opponents followed up with another goal shortly after the start of the second half, putting Pace behind the eight ball.

To the Knights’ credit, they came together in an inspiring show of heart and perseverance to dominate the Cadets for the remaining 35 minutes. Pace finally broke through with freshman Juan Figueroa assisting Pineda with eight minutes remaining to bring the score within a goal, but the Knights couldn’t find an equalizer during the remaining frantic minutes of the game.

This young team with four freshman and four sophomore starters out of 11 players exceeded all expectations over the course of this stellar season. With another year of growth and experience under their belt, Pace boys soccer will enter next season with an invitation to the ball, a Cinderella no longer.