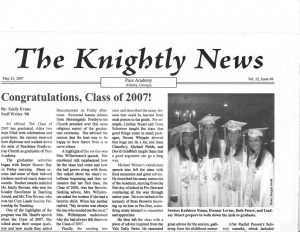 The Class of 2007, which graduated when the current seniors were pre-firsters, are now in their 30s. Photo: The Knightly News

As Pace gets ready to release its new graduating class into the world, the school, along with the rest of the world, has changed in many ways since the current class of seniors were graduating from pre-first in 2007.

But Pace newspapers from the 2006-07 school year show that while much has changed, a remarkable number of things have remained the same. For instance, math teacher and the current sophomore dean, Krista Wilhelmsen, was also the dean of the Class of 2007.

The newspapers also contain a variety of articles on student concerns about workload. These concerns remain just as prevalent or have even heightened as the college admissions process has become increasingly competitive and expectations have risen regarding GPA and standardized test scores.

The May 2007 issue of the newspaper also spoke about senioritis, Spirit Week and Cabaret, Pace traditions that continue to this day. Some articles express concerns about smoking, which Pace was combatting with a smoking awareness campaign. Although the use of cigarettes by Pace students has indeed gone down, it has largely been replaced by e-cigarettes such as Juul.

In January 2007, Nancy Pelosi became the first female speaker of the U.S. House of Representatives. Also, The Knightly News contains articles about mass shootings, such as the one at Virginia Tech, and what legislative changes should occur as a result, a discussion that continues to be hotly debated today.

Some things, on the other hand, have changed. One of the pieces of breaking news of the 2006-07 school year was that, unlike previous years, exams would be moved to after winter break rather than before. Now, it’s hard for students to imagine that exams would ever be after break, forcing them to study and stress over their two-week period of rest.

2007 was also a big year for changing technology. One article from December 2006 presents the advantages and disadvantages of different phones: Nokias, Samsungs, Motorolas, etc. Only a couple of months later, in February of 2007, a small article announced the first iPhone, which was set to be released in June of that year.

The revelation of the iPhone would soon render all other phones, with few exceptions, obsolete, a fact that was likely hard to imagine in the moment. Another article in the newspaper lists the many disadvantages of the FirstClass email system, a system which was replaced in 2015 by Gmail and which many Pace students and faculty recall with mixed feelings.

2007 also marked the year that Pace had begun plans to build the athletic complex now known as Riverview, which was only a couple of fields back then. The snack bar had also undergone some serious changes, with the pizza and cookies that Pace students now know and love being introduced. The dazzling new upper school building was far from reality, not opening for classes until August 2014.

Outside of Pace, the housing bubble burst, an economic change that caused one of the biggest recessions in recent American history. The wars in Afghanistan and Iraq continued. The seventh Harry Potter book, “Harry Potter and the Deathly Hallows,” was released. The Nintendo Wii, following its introduction in late 2006, was the hot new game system. And “iPhone mania” began, changing the use of technology forever.