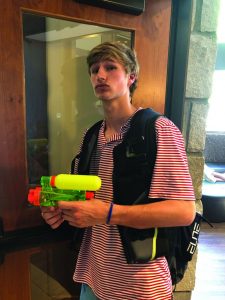 Brogan Smith poses with his water gun as he heads to find his next opponent. Photo: Carly Irvine

There was an increase in floaties in recent weeks, as students played the “Assassin Game,” a four-week-long cat and mouse game played exclusively among seniors. Seniors were invited to sign up for the game online via a shadowy “commissioner,” with a five dollar admission price. A high stakes game, the winner took all money collected.

The game operated in a “kill or be killed” fashion. Each student was assigned a target at the beginning of each week, and had until Saturday to “assassinate” their mark. However, the title of the game isn’t as sinister as it seems. The students “eliminated” their opponents using water guns, but water balloons, buckets of water, and other water-style “weapons” were prohibited.

Why floaties? Once a student was wearing a floaty, they were essentially safe from assassination for the entire day. Though this rule appears to have made the game easier, it’s actually more difficult than it seems. These floaties were made useless on Fridays and Saturdays, making everyone a potential target on those days. To confirm an assassination, students had to send a video to the commissioner, which was later posted on the Instagram account.

The commissioner, who is also the person who introduced “Assassin” to Pace, is senior Carter Ferguson. He originally discovered the game from a friend attending his future college, Clemson University. After reading about the rules of the game online, he selected the ones he thought were best, and sent it to the senior class. “Schools like Westminster have similar games and traditions such as ‘Tots,’” said Ferguson. “Pace doesn’t have a tradition like that… so I’m hoping the next class can also continue to play.”

“Assassin” wasn’t exactly sanctioned by Pace administrators. The disruptive nature of the game raised some concerns over whether it was school appropriate. Rules such as forbidding the game during school hours, during games or practices, and on campus seemed to ensure that the game would be played without causing problems. “There haven’t been any issues so far,” assured Ferguson, midway through the game. “The rules are designed to make as little disruption as possible.”

However, the true purpose for the creation of the game goes a little deeper. Senior Blair Myers, a game participant, described it as making the senior class even closer than before. “It’s so much fun,” said Myers. “At the end of the year, it gives us something exciting to look forward to.” Ferguson agreed. “That’s sort of why I introduced it,” he said. “I thought it would be a great way to end the year.”

The game ended on GAP Day during Ferguson’s senior testimonial in an intense showdown between the final two contestants, seniors Mitchell O’Berry and Devan Johnson. After a surprise attack by O’Berry on Johnson, O’Berry emerged as the winner and received the cash prize composed of all the entry fees paid by the seniors who played, rumored to be around 400 dollars.