Esports To Be New Varsity Sport at Pace 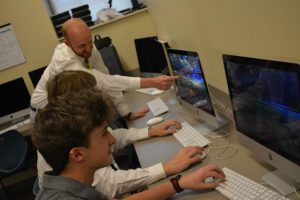 High school level esports will compete during both the fall and spring seasons, consisting of three video games: “League of Legends,” “Rocket League” and “Smite.” The no cut, uniquely coed sport is composed of several three or five-person teams, depending on the game, ranked from most to least experienced.

A major positive of esports is its zero travel policy, hence the fact that all competitions are online, allowing Pace and other schools to play far away teams in the comfort of their own classrooms. In addition, each team at every school is independent of one another, permitting them to compete against themselves and gain experience.

Although Dr. Baker has not officially determined whether or not esports will be incorporated into the athletic program, Mr. Bryant held a meeting to gauge the extent of student interest. “I will be extremely disappointed if Pace does not allow this to happen because it is a great opportunity for those who are less athletically inclined to learn teamwork, persistence and coordination,” said junior Austin Fuller.

Fuller’s hopes and points are synonymous to those of Mr. Bryant. “Growing up for me, team sports was a huge part of my character development,” said Mr. Bryant. “There’s definitely a set of students at Pace who do not have a way to learn those lessons in a team sports environment. Esports provides that opportunity.”

Despite the positivity among students, some parents of the prospective gamers have reservations. The fact that their children would be joining an activity at Pace that requires them to play more video games is an unsettling idea for many. Mr. Bryant is determined to squash the misconception that esports is simply a time to slack off and play your favorite game. Practices will have the exact same goals and focus as any other Pace varsity sport.

The individual teams will be running drills and working on specific mechanics for an allotted amount of time each day. “I want to be very clear that this is not gaming club,” said Mr. Bryant. “We will have practices that are very structured and focused. Sure you’re going to be working on certain aspects of the game you need to improve on, but also we are going to be working on strategic thinking and leadership.”

Online gaming can be a very toxic environment due to the lack of face to face communication, allowing gamers to avoid repercussions for any negative actions. This issue is very important to Mr. Bryant and he has created three main rules for his esports players: be respectful of opponents and each other, work hard everyday to grow as individuals and as a team and have fun, because if you’re not having fun, why even play in the first place.

Esports is not just a growing industry on the high school level, but it has become a nationwide obsession. According to the market analytics company Newzoo, 380 million people worldwide will watch esports this year. A majority of these viewers originate from North America, China and South Korea.

Mr. Bryant is quite an enthusiast himself. “I have a ‘League of Legends’ team that I watch almost every Saturday,” he said. “I cheer for them just like you’d cheer for any other sports team.” In addition to this rapid growth in fan base, colleges have become more receptive to the growing sport. Presently, 200 colleges and universities are offering 10 million dollars in scholarships for esports alone.

Bringing the sport to Pace would introduce students, who typically would never dream of being recruited, to a plausible possibility. “I’ve loved coaching soccer this year, but another thing that makes me really excited about esports is the opportunity to start something,” said Mr. Bryant. “To be the person that builds the foundation that sets the culture from day one. That’s super exciting to me and a really cool way to contribute to the Pace community.”