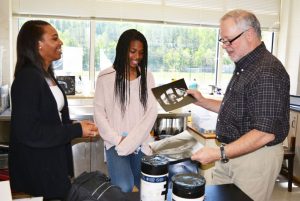 “Success and care,” said junior Meghan McMillin when describing photography and sculpture teacher France Dorman. “He only cares about our success and will go to extreme lengths to help us progress in our daily lives through the lens of photography.”

Mr. Dorman has transformed the photography department at Pace for over thirty years, but at the end of this school year, he begins the next chapter of his life. He not only introduced ICGL trips to India every other year, but is also proud to have brought the Atlanta Celebrates Photography (ACP) art exhibition to Pace, the largest competition of its kind.

Mr. Dorman arrived at Pace in August 1985, having just finished graduate school at Georgia State University. He had been substituting for teachers at Lovett, Pace and Westminster and was soon offered the job at Pace by former headmaster George Kirkpatrick. Mr. Dorman instantly made a contribution to the school by drawing the entire floor plan to scale of the current photography and ceramics rooms. In addition, he initiated the idea of adding a traditional dark room for developing photographs in black and white.

Twenty-eight years ago Mr. Dorman introduced the ACP to Pace, bringing in well-known judges and artists, “the pantheon of photography notables” according to Mr. Dorman. Mr. Dorman has a passion for collaboration and loves how the ACP brings the Atlanta schools together. “Although it is a competition with a cash reward, it is mainly to encourage young artists and that’s what I really like about the ACP,” he said. He is eager to see his students improve and excel in the art world and has a reputation for caring more for them than the prize itself.

His favorite tradition at Pace Academy is the ICGL study tours he leads to Africa and India that allow students to exchange cultures while capturing images of new environments. “All of the ICGL trips are so meaningful to the students, families and to the world because of the impact they make on them and us,” explained Mr. Dorman. “You all are the young leaders who are going to inherit the world on issues of energy, climate and water on a global scale.”

Junior Tanner Walton, who went on the 2018 trip to India, admired how Mr. Dorman immersed himself in the culture by collaborating with the locals. “He was so friendly and outgoing, and it opened my eyes to witnessing a new culture through the lens of photography,” said Walton.

Upon retiring from Pace, Mr. Dorman will continue to be an activist in the areas of environmental conservation and politics. With a traditional and digital dark room along with a ceramics studio in his backyard, he intends to devote full time to his art, with a focus on tying it into current events. His sculptures are considered to be “new reality” or never-seen-before abstract art that is open to interpretation.

He plans to be more politically active in light of the current political climate. ”I think we need to protect the environment through art,” said Mr. Dorman. “The most meaningful artworks are those that refer to the ills of society.”