Mr. Assaf Shines Behind the Lens of His Camera 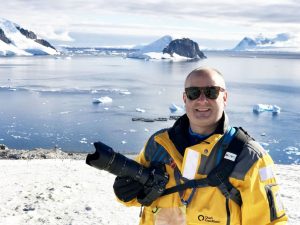 Photos such as this one during a Pace volleyball game display Mr. Assaf’s ability behind a camera. Photo: Fred Assaf

As the late, great Benjamin Franklin once declared: “In this world nothing can be said to be certain, except death, taxes and Fred Assaf taking pictures at Pace events.” If there is any important event that has something to do with Pace Academy, Mr. Assaf is sure to be there, snapping pics to commemorate it. A recent sit-down interview with the head of school allowed for a deep dive into how this came to be one of his favorite pastimes.

Mr. Assaf claims to have developed an interest in photography when taking photos of his own kids during recreational league sports at NYO and Buckhead Baseball. “Mrs. [Martha] Assaf was actually the photographer first,” he said. “Eventually I started borrowing her equipment and it just grew from there.” Since then, he has covered some massive events, ranging from the first-ever Pace football game 13 years ago to annual occasions such as the freshman Phlotilla and prom. According to Mr. Assaf, the key to a successful picture lies not within the camera itself, but instead within the interchangeable lenses that allow for various shutter speeds and exposures.

When asked about his favorite events to photograph, Mr. Assaf paused for a moment to think before finally responding. “The lower school pep rally is pretty fun, but I’ve learned to love volleyball. I never took a lot of volleyball [pictures] until our team got really good over the last few years.” However, as he has become a more experienced photographer, Mr. Assaf appreciates a challenge every once in a while.

Photography is not always as easy as pointing the camera and snapping a shot, as Mr. Assaf has come to learn. “The most challenging thing to photograph is football at night because it’s dark and the lighting is uneven… and it moves very fast so you need a fast lens,” he says.

His high-powered lenses even got the football team into some hot water a few years back. During a regular season game against White County four or five years ago, Mr. Assaf showed a referee that a call that had been made on the field was incorrect, and he had a photo to prove it. Unfortunately, Georgia high school football has a rule that prohibits the use of photographic or video evidence to persuade the referees, and therefore Pace was given a 15-yard penalty. “Coach Slade was not too happy that we got a penalty,” Mr. Assaf said.

A model of consistency, Mr. Assaf works hard to ensure the highest quality pictures for all to enjoy. Be on the lookout for his work, as his photos regularly appear in The Knightly News due to their high resolution and clarity. For anyone interested in checking out Mr. Assaf’s photos, head to https://fredassaf.dphoto.com to rewind all the big events of this past school year and more.