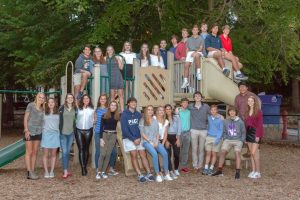 Thirty-one members of the Class of 2019, making up over a quarter of the class’s population, have been together since they started Pace’s Lower School as pre-firsters. Thirteen years later, these “lifers” prepare to graduate and begin studies at a new school for only the second time in their lives.

The lifers reflect positively on their days in the Lower School. Some of the highlights included Fun Money Fridays in pre-first and Fairy Treat Fridays in first and second grade. The fondest memory among many students was the Principal of the Day celebrations. “We got to listen to music in front of the Castle and have hula hoop contests and just have a really fun day,” said senior Kathryn Reisner. 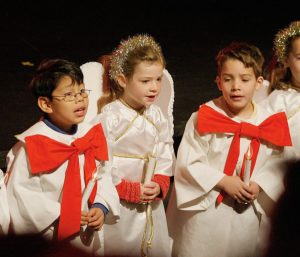 Senior Lily Reckford remembers founding the nature club along with seniors Abigail Lund and Davis Mathis when they were in the first grade. “If our friends weren’t doing that at recess we played gnomes or ‘Star Wars’ which was always so fun,” said Reckford.

The lifers loved Anna Valerius, former Head of Lower School. “Shaking Mrs. V’s hand to get into school every day is one of my fondest memories,” said senior Jacob Sloman.

The students had equally memorable times as they got older and reached the end of Lower School. “I remember being so eager to play at ‘Six Flags’ which is the opposite side of the playground only allowed for fourth and fifth graders,” said senior Emily Payne, who recently chose to attend Auburn University. “It was so exciting when we were finally old enough to play on the other side. I felt like a whole new person!”

The lifers, appreciative for their many memories, have bittersweet feelings toward leaving a place that has had such a big impact on their lives. “I grew up at Pace so it really did become a home away from home,” said Reckford, who will be attending the University of North Carolina at Chapel Hill. “My best friends have been a constant all throughout my time at Pace so they truly shaped the person I am today which I’m so grateful for. It’s still hard for me to process that I won’t get to see them every day but I definitely plan on staying in touch with people as much as I can.”

Many lifers are beginning to realize how much they will miss one another. “I’ve grown up with the same people for 13 years, and we’ve all grown really close, so it’ll be sad when we all go our separate ways,” said senior Carter Frooman, who will join the Clemson University Class of 2023.

Senior Kayla Ross, who will begin at Boston University in the fall, says she “can’t imagine not coming to the Academy every August for the start of a new year.” Reisner feels sad too, but also really looks forward to the new experiences to come when she heads to Washington University in St. Louis in the fall. “I’m excited to try something new and meet new people,” said Reisner. “I’ve never switched schools before, so college will definitely be a big change.”

Sloman, who has decided to study at the Georgia Institute of Technology, is excited to see the many accomplishments his fellow lifers will achieve: “It’ll be really cool to see where they all go to college and what they do from there because we’ve watched each other grow for 13 years,” he said. “Finally leaving each other to pursue new and different things will be bittersweet.”