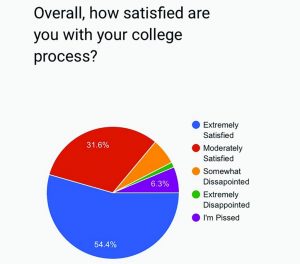 While most were satisfied with their college process experience, others were left wanting more. Photo: Genna Schwarz

The Knightly News recently conducted a senior grade-wide survey about the college admissions process. Out of 119 students, 79 responded to questions, from the type of school they will be attending in the fall to how many colleges they were admitted to.

A small majority of seniors applied to five or fewer colleges, with about 48 percent applying to more than five. Four responders to the survey applied to more than 10 colleges.

Geographically, most students are staying closer to home, with 57 percent of students attending colleges in the Southeast. The next most popular location is the Northeast with 20 percent of students relocating there, and another 13 percent moving to the Midwest. Only eight responders will be traveling across the country and attending college in the West and Southwest United States.

The class is nearly split between public and private colleges and universities, with private selections yielding 56 percent of Pace seniors responding to the survey. Interestingly, the most even metric is the size of the college that students will be attending. It’s almost an even split between large universities, mid-size colleges, and small liberal arts schools.

For a complete picture of where Pace seniors are headed next year, see the list entitled, “Futures of the Class of 2019” in the May print edition and on this website.