For Boys Varsity Lacrosse Team, ‘nadians Are Key to Success 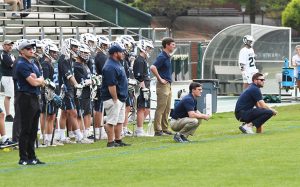 For the last few years, the varsity boys lacrosse team has had the benefit of additional coaching support from two professional lacrosse players from the Georgia Swarm, Canadians Bryan Cole and Shayne Jackson. Coaches Cole and Jackson, who lend their time to the lacrosse team when they are not otherwise training and playing professionally, have been a tremendous asset to the coaching staff of the lacrosse team as well as to the players.

Bryan Cole, 25, an Oakville, Ontario native, was a USILA First Team All-American midfielder for the University of Maryland who helped lead the Terrapins to four NCAA Final Fours during his college playing days from 2012-16. Cole finished his career at Maryland as one of the most successful players in program history, finishing his collegiate campaign with 101 points (43G, 58A).  As team captain during his senior year at Maryland, Cole scored a career-high 50 points, with 21 goals and 29 assists.

Coach Shayne Jackson, 28, a Bowmanville, Ontario native, was a USILA First Team All-American selection and the National Division II Player of the Year in 2012 for Limestone College, finishing his senior year at Limestone with 71 points in 19 games. Selected by the Georgia Swarm in the first round (No. 4 overall) of the 2012 NLL Entry Draft, Jackson has earned the nickname of “Mr. Consistency” in professional lacrosse circles after the forward had four straight seasons of more than 75 points.

Last season, he recorded 85 points (33G, 52A), 75 loose balls, and set a new career-high in single season assists, leading the team with 52. Coach Jackson has also had an outstanding season so far for the Swarm, most recently posting 5 points (3G, 2A), including a team-high 3rd shorthanded goal of the season, in the series against Toronto, and leading the team with a season-high 9 points (5G, 4A) while surpassing his 500 career points with his hat trick goals in the series against Rochester.

For both Swarm players, helping out the lacrosse team when they are not playing or practicing for the Swarm has been a rewarding experience. “I have loved helping out at Pace when I’m not training and keeping in shape for the Swarm,” said Coach Cole. Even though it involves coaching by day and training and competing with the Georgia Swarm at night (with sometimes three or four days a week on the road), both players have really valued their coaching experience at Pace and credit the work ethic of the Pace players.

“My favorite part about coaching the Pace players is watching them progress, both throughout the season and throughout their high school careers. We have come so far from when I started here and I really think this is a state-championship-caliber team,” said Coach Cole. “The mentality of wanting to learn here is so unique and special with these players. They come out every day with their heads screwed on right and willing to learn, and so it is easy to work with them and improve their skills.”

For the Pace boys varsity team players and coaches, the addition of two professional players to the coaching staff (when their Swarm commitments allow) has been an invaluable experience. “Probably the best part about having the Canadian coaches here is the expertise that they bring to each practice,” said head coach Grady Stevens. “Every single practice we are able to get better at even the little things because of them.”

Senior defenseman Andrew Konradt echoes that sentiment. “Through their tough love, I’ve improved a lot and Coach Cole has really made us a stronger defensive unit,” he said. Senior midfielder Andrew Ladden agrees: “Coach Jackson has really helped me develop the fine details of my game – which has made me a much better player.”

So long as both players remain on the Georgia Swarm, the hope is that they will continue to be available to the Pace community as assistant coaches, enhancing the team with their coaching and insights. “The best thing about them is that they bring the same mentality to the lacrosse field that the teachers bring to the classroom,” said Coach Stevens. “We seem to win every time the Canadians are on the sidelines,” said sophomore Tripp Trimble.

The ‘nadians contribution was essential to the boys varsity lacrosse historic season this year. Going into playoffs with a 12-4 record, the Knights defeated Kell High School 13-4 in the first round, their first playoff win since 2006. In the second round, the Knights fought hard against a competitive Buford High School team but fell short with a 7-5 loss.